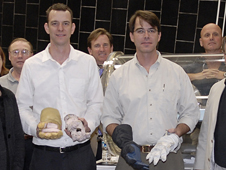 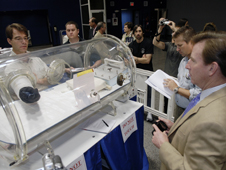 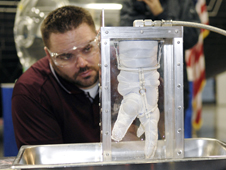 Image above: A representative of ILC Dover monitors how much internal pressure a newly designed glove can withstand during the burst test. Image credit: NASA/Kim Shiflett
› View Larger Image Two independent inventors answered NASA's call for innovative new designs for the next generation of astronaut gloves. Today's spacewalkers have to contend with bulky gloves that stiffen when pressurized, making it tough to grip and flex while completing tasks in the vacuum of space.

Peter Homer and Ted Southern put their prototypes to the test during NASA's 2009 Astronaut Glove Challenge, held Nov. 19 at the Astronaut Hall of Fame in Titusville, Fla., near NASA's Kennedy Space Center.

The ultimate goal of the Astronaut Glove Challenge is to improve the current design, resulting in a stronger and more flexible glove that will reduce the hand fatigue experienced by astronauts working in space.

For the first Astronaut Glove Challenge held in 2007, competitors supplied only the inner pressure-restraining layer. The outer layer, which provides protection against extreme temperatures and micrometeoroids, was an added requirement this year. Representatives from NASA and the agency's spacesuit contractor, ILC Dover, observed and noted the gloves' performances in a series of three tests.

The competitor inserted his gloved arm and hand into a depressurized glove box for the dexterity and flexibility test, completing cycles of movements and tasks, such as gripping a handle, using tools, flexing the hand and wrist, and touching the tip of the thumb to the tip of each finger.

In the joint force test, test operators from ILC Dover sealed and pressurized each glove to 4.3 pounds per square inch (psi) of internal pressure, then tugged it through its full range of motion while measuring the amount of force each movement required.

Finally, the gloves' strength capabilities were measured in the burst test. The room quieted as test operators sealed the glove and filled it with water, slowly increasing the pressure. Competitors, judges and other spectators leaned forward, watching the glove for signs of weakness or rupture.

The event was sponsored by Secor Strategies LLC of Titusville, Fla., and non-profit Volanz Aerospace of Owings, Md., managed the event for NASA.

"Both of you did better than the (current) Phase VI glove, and you both get a round of applause for that," said Alan Hayes, Volanz Aerospace chairman. "The test results were incredibly close."

Both Homer and Southern began working on the project in spring 2006 and competed in the first Astronaut Glove Challenge. Homer took home $200,000 after winning that event. After the 2007 challenge, Southern teamed up with former competitor Nikolay Moiseev.

Prior to the challenge, competitors were in the dark about who else would participate or what their designs might be.

"You're sort of developing in the vacuum of your own little world," Homer said. "You're hoping that you're going far enough with your design. And then there's the aspect of, 'Who am I going to be going up against?' I didn't know Ted was competing until we walked in and saw each other."