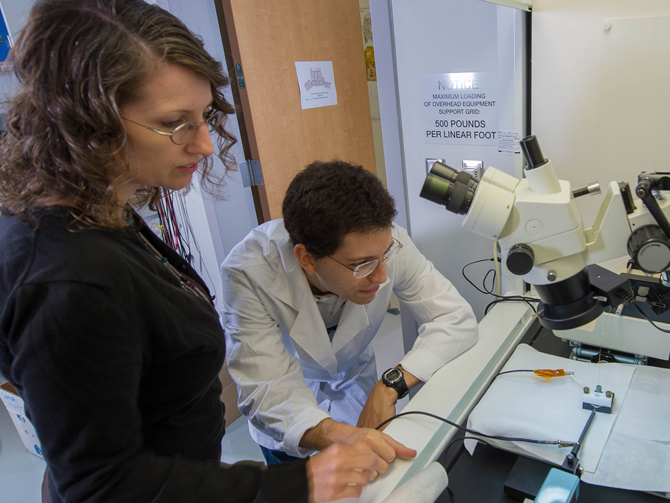 › View larger
Stephanie Getty and her research associate, Adrian Southard, prepare one of OASIS’s instrument components, an electrospray nozzle, for characterization testing. The component converts liquid samples to gas-phase ions and is, in essence, the interface between the liquid chromatograph and the mass spectrometer. Credit: NASA/Chris Gunn

The hunt for the organic molecules that create proteins and enzymes critical for life here on Earth has largely happened in sophisticated terrestrial laboratories equipped with high-tech gadgetry needed to tease out their presence in space rocks and other extraterrestrial samples.

A technologist at NASA’s Goddard Space Flight Center in Greenbelt, Md., now wants to take that search to the sources themselves.

Stephanie Getty, who recently was selected as Goddard’s Innovator of the Year for her trailblazing work in the area of advanced instrumentation, has won $1.2 million from NASA’s Astrobiology Science and Technology Instrument Development (ASTID) program to advance the Organics Analyzer for Sampling Icy Surfaces (OASIS). This miniaturized liquid chromatograph-mass spectrometer leverages technologies developed under previous Goddard-sponsored research and development efforts to study the chirality, or “handedness,” of amino acids on the icy moons of the outer planets, asteroids, and Kuiper Belt Objects.

“It’s like we’re packing up a well-equipped Earth lab and flying it to an asteroid or another solar system body, where we can get access to a pristine supply of these organic molecules to study,” Getty said, adding that by going to the source, scientists reduce the risk of contaminating samples with Earth-borne compounds. “With an instrument like OASIS, we could get that much closer to understanding how organic chemicals formed in the solar system, whether the potential for life exists elsewhere, and what may have seeded life here on Earth.”

And OASIS would carry out this science with 100 times greater sensitivity than what was possible with previously flown liquid chromatograph-mass spectrometers, she added.

The hunt for amino acids in extraterrestrial sources began 50 years ago when scientists discovered a variety of non-terrestrial amino acids in meteorites, remnants of asteroids that had fallen to Earth. Their discovery revolutionized the field of astrobiology, reigniting the question of whether life, as we know it, existed elsewhere in the solar system and beyond.

Amino acids, in part, hold the key to ultimately answering that question. They are the building blocks of proteins — the workhorse molecules of life, used in everything from creating hair and fingernails, to the enzymes that speed up or regulate chemical reactions inside cells. Just as the 26 letters of the alphabet are arranged in limitless combinations to make words, life uses 20 different amino acids in a huge variety of arrangements to build millions of different proteins.

Amino acids demonstrate another interesting characteristic. Although they come in two non-superimposable forms — left-handed and right-handed — only abiotic or non-biological organic compounds use both. The amino acids that give rise to life must have the same orientation or chirality, which means they use only one of the two available mirror images of the amino-acid structure. 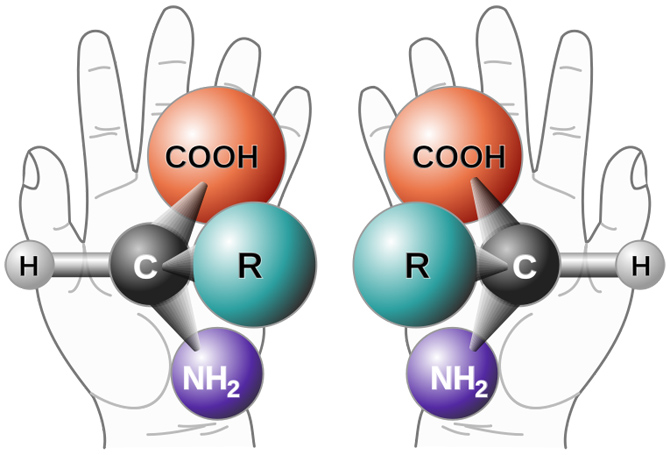 › View larger
This is an example of chirality of amino acids, using hands to illustrate how the molecules are mirror images of each other. Credit: NASA

Life on Earth got established with only the left-handed version, leading scientists to wonder whether this inclination arose because of random processes or whether meteorites may have seeded this propensity.

To find out, Getty’s colleagues at the Goddard Astrobiology Analytical Laboratory have studied carbon-rich meteorites and tiny grains collected from the Wild 2 comet. They discovered an excess of the left-handed amino acids in some of the meteorite samples they studied, suggesting that left-handed amino acids got their start in space, where conditions in asteroids favored the creation of this particular orientation.

“Research shows that meteorites seeding the early Earth could have jump started left-handed-based protein in life as we know it today,” said OASIS Co-Investigator Danny Glavin, a world-renowned expert in extraterrestrial organic chemistry at NASA Goddard. “They contributed these molecules that may have created an initial bias toward left-handedness.”

The question is, does the bias exist on other solar system bodies, and if so, does it favor left- or right-handed amino acids? OASIS’s ability to detect amino acids and determine their chirality — the ratio of left- to right-handed molecules — will be an important capability for ultimately answering that question, Glavin said.

Scientists have used a technique called gas chromatography-mass spectrometry since the 1970s to study organic compounds. NASA first used the technique on the Viking Mission to Mars in 1976, but it failed to detect them due to problems with experiment design. It also is being used on the Goddard-developed Sample Analysis at Mars (SAM) instrument suite aboard the Curiosity rover. Like the Viking version, SAM uses heat to process crushed rock samples. As they heat, the samples break down, releasing gases that SAM’s gas chromatograph and mass spectrometer then measure to identify organic compounds in the samples.

Although effective, heat can fragment organic carbon, resulting in the loss of molecular information. To preserve those details, SAM features a “one-pot” solvent-extraction experiment that is gentler on the samples. Though the experiment is capable of detecting amino acids, it won’t measure chirality, Getty said. Her team specifically is designing OASIS to provide that critical measurement. Instead of heat, the instrument uses liquid to prepare the samples and then separate and detect complex organic compounds, including amino acids.

“We have found that liquid chromatography, coupled with mass spectrometry, is the most sensitive and selective method for measuring amino acids in the laboratory,” Glavin said. “OASIS is our first step towards the development of a miniaturized spaceflight instrument.”

Under the ASTID instrument-development award, Getty’s team is building a breadboard system equipped with an advanced miniaturized mass spectrometer originally developed for the Volatile Analysis by Pyrolysis of Regolith (VAPoR) instrument, which Glavin conceived for determining whether the large concentrations of hydrogen on the lunar poles were actually water ice deposited by comet bombardments.

Among other technologies, it also will include a “lab-on-a-chip” liquid chromatograph, an instrument that — like Glavin’s VAPoR — traces its heritage to previous Goddard Internal Research and Development (IRAD) program investments. “The real key is liquid chromatography,” Getty said. “It will separate the sample according to chemical structure, giving us another dimension of data, another approach for teasing out details that would identify the compound.”

Ultimately, the team hopes to further miniaturize the breadboard to produce a low-mass, low-power, flight-qualified instrument weighing no more than 11 pounds. “These are lean times for planetary science,” Getty said, “but it helped to have those four years of IRAD support to hone our message and mature the component-level technology. This instrument will be 100 times more sensitive, yet smaller and lighter weight than what we’ve flown so far.”