He and his team at NASA's Goddard Space Flight Center in Greenbelt, Md., have developed an automated, lightweight, laser-induced fluorescence device that measures the levels of this difficult-to-measure organic compound in the lower troposphere and then again at much higher altitudes. The primary objective is determining how much pollution a storm can transport through convection and then using those insights to improve chemistry-climate models. "It's a major problem in modeling knowing how to treat transport and clouds," Hanisco explained.

In the spring, he flew the In-Situ Airborne Formaldehyde Instrument for the first time on a NASA DC-8 research aircraft, a former passenger airplane that can fly up to 43,000 feet. 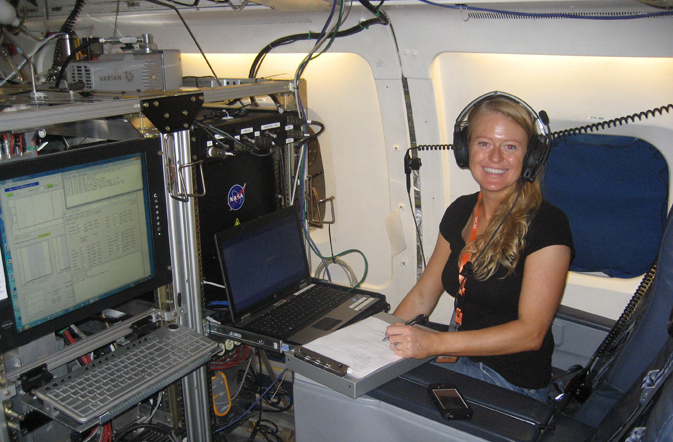 "People like this instrument because it's small, sensitive, and easy to maintain," said Hanisco. The instrument weighs only 60 pounds, and therefore is easily installed inside other research aircraft, including NASA's ER-2, Global Hawk, and WB57, which fly at much higher altitudes. In addition, it's automated and doesn't require anyone onboard to operate it, Hanisco said.

Prior to its development, only one other airborne instrument could measure formaldehyde. That instrument, however, weighed 600 pounds, required an onboard operator, and used a less-sensitive measurement technique -- absorption spectroscopy -- to gather data.

This image shows the new air-sampling system that is more efficient at drawing in air and preventing particles from sticking and potentially contaminating formaldehyde measurements. Credit: NASA
› Larger image

"I've been doing laser-induced fluorescence on other molecules for a while," Hanisco said, explaining why he sought and received Goddard Internal Research and Development funds to apply the measurement technique to a formaldehyde-sensitive instrument. "Formaldehyde isn't measured well at high altitudes. There was a real need for improvement."

With laser-induced fluorescence (LIF), a laser first illuminates the species of interest and "then you watch it fluoresce. It is a single photon-counting instrument," Hanisco said. Consequently, it's faster and more sensitive -- even at concentrations in the parts per trillion, he said.

The DC-8 campaign in Kansas, sponsored by the National Center for Atmospheric Research's Deep Convective Clouds and Chemistry Project, bore out the wisdom of his pursuit, proving that his instrument offered a factor-of-10 improvement in size, sensitivity, and complexity. During that campaign, a DC-8 flew as low as 500 feet above the ground and sampled air entering a storm. It then spiraled up to 30,000 to 40,000 feet and measured the air coming out at the top of the storm.

The instrument found that 30 to 40 percent of the formaldehyde produced in the "boundary" layer -- the lowest part of the troposphere closest to Earth's surface -- was transported to the upper troposphere during storms. "That number is a rough guideline, but we didn't have it before. Every storm is different, but knowing how much air gets through is a big step forward."

Hanisco attributes the instrument's success to its greatly simplified design and a new fiber-laser system that is smaller and less expensive than those used in other LIF-type instruments. He also attributes its success to a new air-sampling system, which features a glass- and Teflon-coated tube that draws in and directs air into the instrument's detection cell. Though the polymer-coated sampling system allows air to flow quickly, its surface prevents particles from sticking -- particularly useful because they could corrupt results. "We had to work hard to ensure that the sampling system was every bit as good as the detection," Hanisco said.

Hanisco anticipates many other flight opportunities in the future. "There was a real need for this instrument. There aren't a lot of instruments out there doing this."