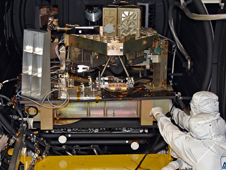 An engineering test unit of the Fine Guidance Sensor is about to undergo cryogenic testing at the David Florida Lab in Canada. Credit: CSA, COMDEV
› Larger image 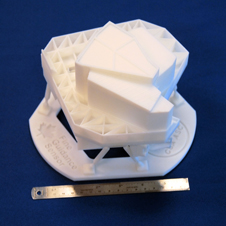 JWST's Fine Guidance Sensor model. Note the ruler at the bottom of the model that shows the sensor is just over 6 inches long. Credit: CSA, COMDEV
› Larger image 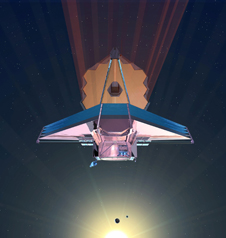 The arrival of the engineering test unit marks a major milestone for the Canadian team. The hardware has been put through its paces at the Canadian Space Agency's David Florida Lab to ensure that the final version will function at peak performance. While all space missions undergo extensive testing, this step is particularly crucial for Webb because it will be located at the L2 point in space, which is about 930,000 miles away from the Earth in the exact opposite direction from the sun, and too far to be serviced by astronauts.

Scott Lambros, Webb telescope instrument systems manager at NASA Goddard said, "The delivery of the Fine Guidance Sensor (FGS) Engineering Test Unit is another milestone towards launch of the Webb telescope. In the coming months we will use the ETU to test interfaces between the FGS instrument and the Webb Observatory, to ensure that any discrepancies will be accounted for in the flight versions of the hardware." Just as important, the milestone is an indication of the great working relationship we have between NASA and the CSA/COM DEV team. "It's been a joy working with this group of people. I look forward to continuing that work to the next milestone of delivery of the flight model FGS next year," Lambros said.

The Fine Guidance Sensor consists of two specialized cameras that are critical to Webb’s ability to "see": they will work like a guiding scope to allow the Webb space telescope to locate its celestial targets, determine its own position and remain pointed at an object so that the telescope can collect high-quality data. The FGS will measure the position of guide stars with incredible precision, pinpointing them with an accuracy of one millionth of a degree. The angle formed by someone holding up a quarter at a distance of 930 miles away, which is almost as far from Boston to Chicago.

The TFI’s unique capabilities will allow astronomers to peer through clouds of dust to see stars forming and planetary systems, possibly even exoplanets (planets outside our Solar System). It also offers unique capability to find the earliest objects in the Universe’s history. The Canadian Project Scientist for Webb is Dr. John Hutchings of the National Research Council of Canada. Dr. René Doyon of the Université de Montréal is the principal investigator for TFI. Canada is also providing functional support of the science operations for the Webb space telescope. The Canadian Space Agency will deliver the flight units of the FGS and the TFI to NASA in 2011.

Webb will be the first next-generation large space observatory and will serve thousands of astronomers worldwide for a planned lifetime of 10 years or more. Designed to detect light from as far away as approximately 14 billion light years, it will study every phase in the history of our Universe, ranging from the first luminous glows after the Big Bang, to the formation of solar systems capable of supporting life on planets like Earth, to the evolution of our own Solar System. Its advanced technology also enables it to discover hitherto unknown phenomena in the Universe.

For more information on Canada’s involvement in the James Webb Space Telescope, including imagery, visit:
www.asc-csa.gc.ca/eng/satellites/jwst/default.asp Goddard Release No. 10-077