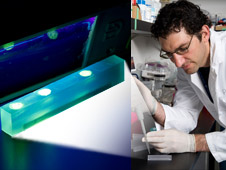 Chemist Adrian Ponce has devised a new method to quickly validate - from days to minutes - a spacecraft's cleanliness. This sample holder (left) shows samples glowing under ultraviolet light. Image credit: NASA/JPL
› Larger image PASADENA, Calif. - A chemist at NASA's Jet Propulsion Laboratory in Pasadena, Calif., has developed a technology intended to rapidly assess any presence of microbial life on spacecraft. This new method may also help the military test for disease-causing bacteria, such as a causative agent for anthrax, and may also be useful in the medical, pharmaceutical and other fields.

Adrian Ponce, the deputy manager for JPL's planetary science section, devised the new microscope-based method, which has the potential to quickly validate -- from days to minutes -- a spacecraft's cleanliness.

NASA adheres to international protocols by striving to ensure that spacecraft don't harbor life from Earth that could contaminate other planets or moons and skew science research. Microbes known as bacterial endospores can withstand extreme temperatures, ultraviolet rays and chemical treatments, and have been known to survive in space for six years. This resilience makes them important indicators for cleanliness and biodefense, Ponce said.

"Bacterial endospores are the toughest form of life on Earth," Ponce explained. "Therefore, if one can show that all spores are killed, then less-resistant, disease-causing organisms will also be dead."

The new technology works by looking for dipicolinic acid -- a major component of endospores and evidence of endospore growth -- by first applying terbium to a dime-sized area. Terbium is a chemical element used to generate the color green on television screens. That area is then illuminated under an ultraviolet lamp. Within minutes, one can see through a microscope aided by a digital camera whether live endospores are present. That's because they will literally glow: The terbium will show the endospores as bright green spots.

Ponce co-authored a paper on the new technology, called Germinable Endospore Biodosimetry, along with Pun To Young, a post-doctoral student at the California Institute of Technology in Pasadena, in the journal Applied and Environmental Microbiology. The research was also highlighted in Microbe, a magazine of the American Society for Microbiology.

The technology has piqued the interest of the U.S. Department of Homeland Security. The federal agency is funding development of a portable instrument based on Ponce's research that could quickly check for decontamination of pathogens after a biological attack. Ponce is working with the Department of Homeland Security and Advance Space Monitor, a company based in Falls River, Mass., to develop the instrument, which they plan to have ready for use by 2011. JPL and Caltech licensed the technology to Advance Space Monitor.

"As part of the Department of Homeland Security Science and Technology Directorate's near-term bioassays effort, the technology could enable the rapid assessment of facility sterilization. This could significantly reduce the time and cost of building restoration following a bio-contamination event," said James Anthony, chemical and biological research and development program manager at the Dept. of Homeland Security. A bioassay is an assessment of whether certain biological material is present on a surface being tested.

Anthony added that the technology could also be used in bio-containment facilities that have regularly scheduled decontamination requirements and rapidly reactivate important bio-defense research facilities.

Besides outer space and defense purposes, this new technology might also be applied in hospitals, child-care centers, dentists' offices and nursing homes.

"Given all the problems with hospital-acquired infections, assessing the sterility and hygiene of medical equipment and surfaces is becoming increasingly important," said Ponce.

Funding for Ponce's project was provided by NASA's Astrobiology Science and Instrument Development Program and Mars Technology Program, and the U.S. Department of Homeland Security's Chemical and Biological Research and Development division.

More information on JPL's planetary science department is at http://science.jpl.nasa.gov/PlanetaryScience .

More information about Ponce and his research is at http://science.jpl.nasa.gov/people/Ponce/ .

More information about the U.S. Department of Homeland Security is at www.dhs.gov.