Imagine a machine that can build a part or a tool as the need arises, whether on Earth, Mars or the International Space Station.

Almost 10 years ago, engineers at NASA's Langley Research Center imagined just that. They developed the Electron Beam Freeform Fabrication, or EBF3, a process that uses an electron beam gun, a dual wire feed and computer controls to manufacture metallic structures for building parts or tools in hours, rather than days or weeks.

With the EBF3 acting as a sort of remote machine shop, the need for sending up tools and parts in a spacecraft could be eliminated. And the tight tolerances in fabrication become even more critical in zero gravity situations.

Here and now, its capabilities are being used in a partnership between NASA and manufacturing.

"This is exactly the kind of technology we want to capitalize on," said Lori Garver, NASA's deputy administrator. "We want to push the technology boundary, not only with improvements of our own systems, but it is our job to also see that growth in the private sector." 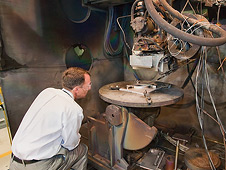 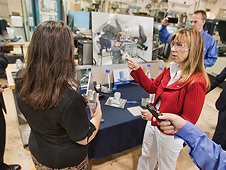 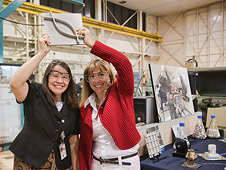 Garver and Bobby Braun, NASA's chief technologist, visited Langley to learn about a way in which NASA can help industry.

The EBF3 is being used to manufacture titanium spars for vertical tails of the F-35 Joint Strike Fighter. Less wasted titanium and reduced machining times result in a savings for partners, Lockheed Martin and Brisbane, Australia-based Ferra Engineering, which will open the world's first facility to manufacture the F-35 components.

"But this first application doesn't mean we are finished," said Karen Taminger, a materials engineer at Langley. In fact, they are just beginning.

According to Taminger, most of the interest in the technology is coming from aerospace because of the EBF3's capability to tailor material and properties and improve the performance of aircraft.

The EBF3 can manufacture complex geometrics in a single operation and provides efficient use of power and feedstock. Garver and Braun saw that when they peered into a porthole to view an electron beam melting a wire into a continuous bead of aluminum that goes onto a plate. As the wire melts, a vacuum pulls out the air.

The computer-driven process can designate shapes and patterns and leaves behind no wasted material. It can also resurface a design with a harder material, making it lighter and more cost-efficient. For the aviation industry, lighter means less fuel burn.

As the technology is introduced, applications for new industries are evolving. Recently, while showcasing the EBF3 on Capitol Hill, a representative from GM showed interest in using it to build tools for automobile manufacturing.

Langley is the only dedicated research center using this technology.

Through a combination of technology and NASA's research efforts, Taminger sees it as a win-win for the private sector. And for Garver, the victory stretches across the country, and the world, with the creation of more manufacturing jobs and improved quality of life.

Applications of the EBF3 are not limited to imagination. They can be seen, used and shared. And then, imagined further.