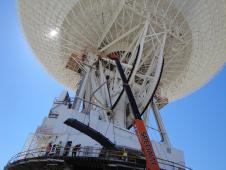 Under the unflinching summer sun, workers at NASA's Deep Space Network complex in Goldstone, Calif., use a crane to lift a runner segment that is part of major surgery on a giant, 70-meter-wide antenna. Image credit: NASA/JPL-Caltech
› Full image and caption
› View related video 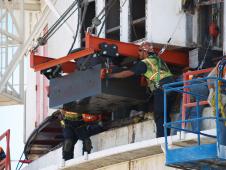 PASADENA, Calif. –The seven-month upgrade to the historic "Mars antenna" at NASA's Deep Space Network site in Goldstone, Calif. has been completed. After a month of intensive testing, similar to the rehabilitation stage after surgery, the antenna is now ready to help maintain communication with spacecraft during the next decade of space exploration.

The month of October was used as a testing period to make sure the antenna was in working order and fully functional, as scheduled, for Nov. 1. A team of workers completed an intense series of tasks to reach its first milestone – upgrading the 70-meter-wide (230-foot-wide) antenna in time to communicate with the EPOXI mission spacecraft during its planned flyby of comet Hartley 2 on Nov. 4.

The first official demonstration space track was on Sept. 28, when the antenna communicated with NASA's EPOXI mission spacecraft.

"We've been testing the antenna since Sept. 28, and we've had no problems in tracking the spacecraft," said Peter Hames of NASA's Jet Propulsion Laboratory, Pasadena, Calif., who is responsible for maintaining the network's antennas. "We are ready to resume service as scheduled." JPL manages the Deep Space Network for NASA.

Unlike the sterile confines of an operating room, this surgery took place in the middle of California's Mojave Desert, a hot oasis baked by the unforgiving desert heat. The team members were able to cheat the heat by completing a number of the 375 tasks during early morning and night shifts. The tasks required the team to analyze, load, lift, install, test, analyze again and inspect.

The Deep Space Network consists of three deep-space communication facilities positioned approximately 120 degrees of longitude apart. In addition to the Mojave Desert location at Goldstone, the other locations are outside of Madrid, Spain, and Canberra, Australia. Each 70-meter (230-foot) antenna is capable of tracking a spacecraft traveling more than 16 billion kilometers (10 billion miles) from Earth. The antennas are strategically situated at each location in semi-mountainous basins to reduce radio frequency interference. This careful placement helps make the Deep Space Network the largest and most sensitive science telecommunications system in the world.

In March 1966, the antenna, officially known as Deep Space Station 14, earned its nickname as the Mars antenna because its first-ever signal came from NASA's Mariner 4 mission to Mars. The historic dish is now responsible for tracking an entire fleet of missions, including the rovers Spirit and Opportunity currently on the surface of Mars, the Cassini orbiter at Saturn, the twin Voyager spacecraft in the outer reaches of our solar system, and the Spitzer Space Telescope, which observes stars, galaxies and other celestial objects.

"We are nearing the completion of a very challenging engineering effort that will extend the life of one of the DSN's workhorses, making it more available and reliable in returning critical science data through at least 2025," said Wayne Sible, the network's deputy project manager at JPL.

The antenna upgrade was a collaborative effort between JPL, Diani Building Corp., Santa Maria, Calif., and ITT Corp., White Plains, N.Y. Their shared goal was to emerge from the "operating room" with a healthy patient.

"The 70-meter antenna gets under your skin, everyone involved in this project was so passionate about it, from the grout workers to the machine shops to the guys on the antenna, everybody was giving it their absolute all," said Hames.

JPL, a division of the California Institute of Technology in Pasadena, manages the Deep Space Network for NASA Headquarters, Washington.

More information about the Deep Space Network is online at: http://deepspace.jpl.nasa.gov/dsn .