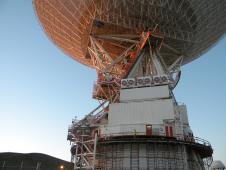 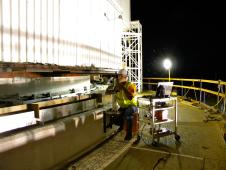 Workers at NASA's Deep Space Network complex in Goldstone, Calif., have been making precise, laser-assisted measurements to ensure a flat surface for pouring new grout as part of a major renovation on the 70-meter-wide (230-foot-wide) "Mars antenna." While officially dubbed Deep Space Station 14, the antenna picked up the Mars name from its first task: tracking NASA's Mariner 4 spacecraft, which had been lost by smaller antennas after its historic flyby of Mars.

This work represents the first time network engineers have redesigned and replaced the hydrostatic bearing assembly, which enables the antenna to rotate horizontally. To accomplish this, they lifted the entire rotating structure of the giant antenna for the first time.

The hydrostatic bearing assembly puts the weight of the antenna on three pads, which glide on a film of oil around a large steel ring. The ring measures about 24 meters (79 feet) in diameter and must be flat to work efficiently. After 44 years of near-constant use, the Mars antenna needed a kind of joint replacement, since the bearing assembly had become uneven.

Engineers and managers at NASA's Jet Propulsion Laboratory in Pasadena, Calif., which manages the Deep Space Network for NASA, drew up plans for new runner segments, new sole plates below the runner segments, and an epoxy grout that is more impervious to oil. The thicker segments deform less when the antenna's pads pass over them, and allow for more tightly sealed joints.

Since beginning work in March, engineers and technicians have carefully lifted several million pounds of delicate scientific instruments about five millimeters (0.2 inches) and transferred the weight of the antenna to temporary supporting legs. They have removed the old steel runner and cement-based grout. They have also installed sole plates, which cover the grout and anchor the new runner. Over the past week, JPL engineers checked to make sure the sole plates were level, and workers poured the new epoxy grout underneath to hold them in place. Mixing and pouring the new grout occurred at night to ensure the work was completed within the tight temperature tolerances required to handle this material.

Over the next few weeks, the new, thicker steel runner segments will be installed. Work is on track to return the antenna to service on Nov. 1, 2010.

For more details about the work on the Mars antenna, visit: http://www.jpl.nasa.gov/news/news.cfm?release=2010-083

For more information about the Deep Space Network, visit: http://deepspace.jpl.nasa.gov/dsn