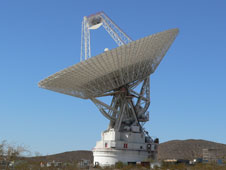 
Like a hard-driving athlete whose joints need help, the giant "Mars antenna" at NASA's Deep Space Network site in Goldstone, Calif. has begun major, delicate surgery. The operation on the historic 70-meter-wide (230-foot) antenna, which has received data and sent commands to deep space missions for over 40 years, will replace a portion of the hydrostatic bearing assembly. This assembly enables the antenna to rotate horizontally.

The rigorous engineering plans call for lifting about 4 million kilograms (9 million pounds) of finely tuned scientific instruments a height of about 5 millimeters (0.2 inches) so workers can replace the steel runner, walls and supporting grout. This is the first time the runner has been replaced on the Mars antenna.

The operation, which will cost about $1.25 million, has a design life of 20 years.

"This antenna has been a workhorse for NASA/JPL for over 40 years," said Alaudin Bhanji, Deep Space Network Project manager at NASA's Jet Propulsion Laboratory, Pasadena, Calif. "It has provided a critical lifeline to dozens of missions, while enabling scientific results that have enriched the hearts and minds of generations. We want it to continue doing so."

The repair will be done slowly because of the scale of the task, with an expected completion in early November. During that time, workers will also be replacing the elevation bearings, which enable the antenna to track up and down from the horizon. The network will still be able to provide full coverage for deep space missions by maximizing use of the two other 70-meter antennas at Deep Space complexes near Madrid, Spain, and Canberra, Australia, and arraying several smaller 34-meter (110-foot) antennas together.

NASA built the Mars antenna when missions began venturing beyond the orbit of Earth and needed more powerful communications tools. The Mars antenna was the first of the giant antennas designed to receive weak signals and transmit very strong ones far out into space, featuring a 64-meter-wide (210-foot) dish when it became operational in 1966. (The dish was upgraded from 64 to 70 meters in 1988 to enable the antenna to track NASA's Voyager 2 spacecraft as it encountered Neptune and Uranus.)

While officially dubbed Deep Space Station 14, the antenna picked up the Mars name from its first task: tracking the Mariner 4 spacecraft, which had been lost by smaller antennas after its historic flyby of Mars. Through its history, the Mars antenna has supported missions including Pioneer, Cassini and the Mars Exploration Rovers. It received Neil Armstrong's famous communiqué from Apollo 11: "That's one small step for man. One giant leap for mankind." It has also helped with imaging nearby planets, asteroids and comets by bouncing its powerful radar signal off the objects of study.

A flat, stable surface is critical for the Mars antenna to rotate slowly as it tracks spacecraft. Three steel pads support the weight of the antenna rotating structure, dish and other communications equipment above the circular steel runner. A film of oil about the thickness of a sheet of paper -- about 0.25 millimeters (0.010 inches) -- is produced by a hydraulic system to float the three pads.

After decades of constant use, oil has seeped through the runner joints, slowly degrading the structural integrity of the cement-based grout that supports it. Rather than continuing on a weekly schedule to adjust shims underneath the runner to keep it flat, Deep Space Network managers decided to replace the whole runner assembly.

"As with any large, rotating structure that has operated almost 24 hours per day, seven days per week for over 40 years, we eventually have to replace major elements," said Wayne Sible, the network's deputy project manager at JPL. "We need to replace those worn parts so we can get another 20 years of valuable service from this national treasure."

Over the next few months, workers will lay a new epoxy grout that is impervious to oil and fit the antenna with a thicker runner with more tightly sealed joints. They will then test that the rotation is smooth before turning the antenna back on again.

"The runner replacement task has been in development for close to two years," said JPL's Peter Hames, who is responsible for maintaining the network's antennas. "We've been testing and evaluating modern epoxy grouts, which were unavailable when the antenna was built, updating the design of the runner and designing a replacement process that has to be performed without completely disassembling the antenna. We've had to make sure we've reviewed it for practicality and safety."