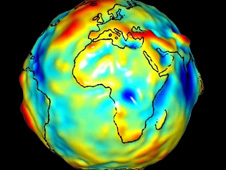 An Earth dataset visualization showing topography with the data overlaid on the Earth found within the The Global Change Master Directory. This catalog of data was created to enable users to access datasets and services relevant to global change and Earth science research. Image Credit: NASA. NASA has contributed a wide range of scientific data to the new publicly accessible Web site "Data.gov" in accordance with the administration's Open Government Directive issued in Dec. 2009.

The purpose of Data.gov is to increase public access to high value datasets generated by the Executive Branch of the federal government. Public users may search for information by topic or by accessing the data contributed by any of the 24 participating major government departments and agencies.

The data may be read on line or downloaded to improve public knowledge of the agency and its operations; potentially create economic opportunities; or respond to need and demand as identified through public or industry consultation.

NASA products are in the Tool and GeoData Catalogs. Tool Catalog products include planet counter and climate change widgets and various Earth observation and other analysis utilities. In the GeoData Catalog, the agency posted more than 600 datasets across a wide range of imagery, maps, atmospheric, climate, geological and geophysical data. NASA will continuously update and add new data sets as they become available.

NASA's submission of an additional 18 catalogs released today is the first milestone within the Open Government Directive. Over the coming weeks, NASA will release a new Web site and provide a platform for public participation and engagement becoming a more transparent, participatory and collaborative agency.

For information about and access to Data.gov, visit: www.data.gov.