Grow Text SizeShrink Text Size
NASA Goddard Team to Demonstrate Miniaturized Spectrometer-on-a-Chip
The Composite Infrared Spectrometer (CIRS) is big. It's powerful and it discovered, among other things, that Saturn's mysterious moon Enceladus was one of the very few worlds in the solar system that radiated several gigawatts of heat into space, primarily along prominent fractures dubbed "tiger stripes."

If a team of technologists at NASA's Goddard Space Flight Center in Greenbelt, Md., succeeds, however, scientists in the future won't observe these far-flung worlds with instruments the size of dishwashers. 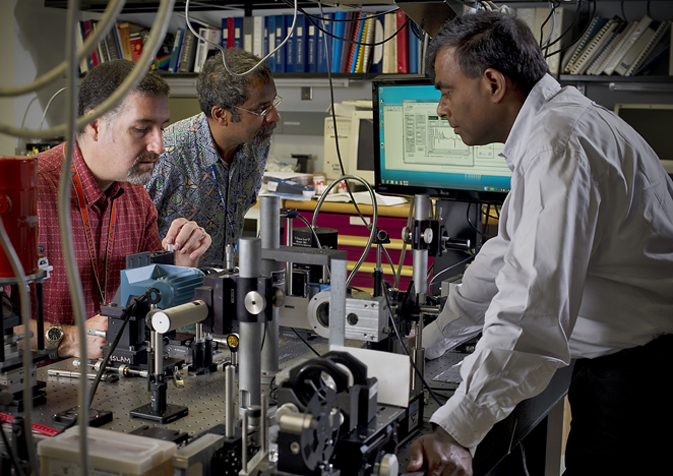 George Shaw (left), Shahid Aslam (center) and Tilak Hewagama (right) are testing technology that could result in a "spectrometer-on-a-chip." (Credit: NASA Goddard/Chris Gunn)
› Larger image
Rather, they will make their discoveries with dramatically smaller, more efficient models whose critical components fit onto a silicon wafer and do not require moving parts to operate -- unlike the breadbox-size components found inside the Goddard-developed CIRS, which flew on the flagship Cassini-Huygens mission to Saturn.

"The Holy Grail is reducing the number of moving parts, which will allow us to build lighter, smaller instruments," said team member John Allen. "The smaller the device, the better. That's where the power of our effort really begins to take off."

The potentially revolutionary Miniaturized Waveguide Fourier Transform Spectrometer (FTS), which, like CIRS, would be sensitive to the mid-infrared bands, is a greatly scaled down version of the Michelson-type FTS commonly used to study the spectra of planets and stars and identify their chemical makeup and other physical properties.

With traditional Michelson-type instruments, a beamsplitter takes the incoming light gathered by a telescope and divides it into two optical beams. One beam of light reﬂects off a ﬂat mirror that is fixed in place on one arm of the instrument; the other reﬂects off another mirror, which is attached to a mechanism that moves the mirror a very short distance -- typically a few millimeters (or tenth(s) of an inch) -- away from the beamsplitter. At the end of the optical path, the two beams recombine.

Because the path that one beam travels is ﬁxed in length and the other is constantly changing as its mirror moves, the signal that exits the device is the result of these two beams "interfering" with one another. When analyzed with the Fourier transform, a mathematical theorem invented by Joseph Fourier in 1811, the resulting interferogram produces a spectrum revealing the various wavelength frequencies emitted by the source.

Though this type of spectrometer is ubiquitous in science investigations, "obtaining an accurate spectrum with the instrument exacts a penalty in the form of mass, electrical power, and moving parts that can fail," explained Shahid Asalm, the principal investigator leading the effort funded by NASA's Center Innovation Fund and Goddard's Internal Research and Development program. To find berths on future planetary missions, instruments would have to be significantly smaller, lighter, and more capable, he said.

To lighten the load and reduce complexity, the team wants to replace the mirrors and associated hardware with a microscale photonic system featuring 60 hollow waveguides, or tunnel-like circuits, 10 times thinner than a human hair. 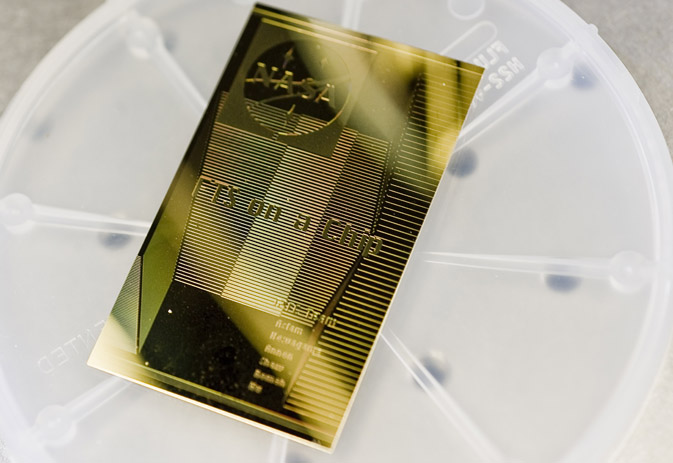 This is a close-up view of the "spectrometer-on-a-chip" technology that could dramatically reduce the size of spectrometers in the future. (Credit: NASA Goddard/Chris Gunn)
› Larger image
Etched inside a silicon wafer, these tiny circuits would carry out the job of more traditional Michelson-type spectrometers. The light would travel down these tiny tubes, hit a Y-junction, split, and then continue its journey down two separate channels. One beam would take a relatively straight path; the other would take a path that loops slightly to create a longer route. The two beams would then recombine to create one intensity point on an interferogram from which to derive a spectrum.

"The result is a spectrometer-on-a-chip that fits in the palm of a hand, excludes moving parts, and samples the complete inteferogram simultaneously," Aslam said. "In addition, the device does not require mechanical power to move the mirror, nor any bulky, high-precision free-space optics as in classical Fourier transform spectrometers. The significance of our research is that we're transforming how we propagate light. We're replacing large, high-precision optics with microscale light pipes."

Although researchers have reported creating a similar device tuned to the visible and near-infrared wavelength bands, no one has attempted it for instruments sensitive to mid- and long-infrared light. "When we do simulations, we find the physics are true. No rules are violated. In principal, we should be able to make a device like this," Aslam said, adding that he and his team, also including Co-Principal Investigator Tilak Hewagama and engineer George Shaw, plan to demonstrate the device by the end of the year.

Demonstrating that the approach can produce an interferogram is one challenge. The other will be in engineering an instrument that can take advantage of the micro optics and gather useful science. "This is embryonic," Allen agreed. "We'll need a few more years to advance this technology and I'm sure we'll encounter a lot of pitfalls. But we have to try to understand how these photonic circuits work efficiently," Asalm said, adding it took a Goddard team nearly 10 years to develop CIRS.

Should the group succeed, Aslam said the payoff will be huge, not only for NASA's science disciplines, but for biotechnology and other commercial applications. Asalm envisions using the technology for detecting dangerous pathogens and other life-threatening materials in trucks and shipping containers because of its potential to reduce the size of instruments for more mobile use. "Anywhere you're trying to remotely sense, I think this technology has a multitude of applications," Allen said.