Grow Text SizeShrink Text Size
An Answer to Green Energy Could Be in the Air
In Mark Moore's world, long nanotubes reach into the clouds, serving at once to tether a turbine-vehicle flying at 2,000 feet, or 10,000 feet, or 30,000 feet (610, 3,050 and 9,150 meters); and also to conduct the power that vehicle can harvest from the wind back to Earth. 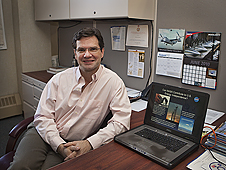 NASA aerospace engineer Mark Moore in his office. Moore is part of the first federally-funded research effort to examine airborne wind capturing platforms. He's developing methods the government can use to fairly evaluate competing ideas on how to capture and use wind energy efficiently. Credit: NASA/Sean Smith

Aloft might be a funnel-shaped blimp with a turbine at its back; or a balloon with vanes that rotate; a truss-braced wing; a parachute; a kite. Any and all of them are ideas being considered by nascent renewable energy industry that is flexing its imagination.

Moore, who works as an aerospace engineer, centering his focus on advance concepts in the Systems Analysis Branch at NASA's Langley Research Center, is using a $100,000 grant from the federal government to research what it will take to judge the value of any of those ideas.

"It's the first federally funded research effort to look at airborne wind capturing platforms," Moore said. "We're trying to create a level playing field of understanding, where all of the concepts and approaches can be compared -- what's similar about them? What's different about them, and how can you compare them?"

But the Wright Brothers didn't have to deal with a crowded sky and the laws regulating it when they took off at Kitty Hawk. When they invented the airplane, they also created competition for airspace that makes creating air-borne power generation much more difficult.

"Airspace is a commodity," Moore said. "You have to be able to use airspace without disrupting it for other players. Smaller aircraft are still going to need to fly around. Larger airplanes, you can't expect them to fly around every wind turbine that has a two-mile radius as a protected flight zone."

It's another issue in considering air-borne power generation, which Moore hastens to say it not THE answer to clean energy but deserves consideration in a mix that includes solar power, ground-based wind turbines, algae and the other solutions both realistic and exotic that are being worked upon by scientists and engineers.

None have approached the cost of fossil fuel energy for thrift, but Moore argues that cost takes on a new dimension when all of its factors are considered, including the amount of land used in generating that power and its impact upon the atmosphere.

Tethers for airborne wind generation assets don't require a lot of ground space, nor are they labor intensive. And they don't pollute.

"They could stay up a year, then come down for a maintenance check and then go back up," Moore said. "Or they could be reeled in in case of a storm. Or one operator could watch over 100 of these."

Wind power is nothing new. Wind turbine farms have dotted the landscape for more than a generation. So why is this different?

One answer involves the vehicle to be flown. Another involves where to fly it.

"All you have right now are small companies doing the research, and all you can expect of them is to focus on one little piece," Moore said. "They have enough trouble just analyzing their concept without worrying about geography, about 'where should I mount these so that the wind is optimal?' "

The ultimate answer could be the federal government itself.

"In my mind, it's crazy that there isn't federal investment in this area, because the questions are just too great for small companies to answer," Moore said.

It's one of the reasons he has undertaken the wind-power study, which actually, he maintains, should be two studies. One involves the technology and geography. The other involves the interaction between those elements and other competitors for airspace.

That means dealing with current Federal Aviation Administration regulations and with those that might be necessary to accommodate an airspace that includes manned aircraft, the unmanned aircraft in the future, plus wind-borne energy turbines.

He offers another option that can help the FAA in its decision-making.

"Offshore deployment of these airborne systems probably makes the most sense in terms of both airspace and land use, because there is little to no demand for low altitude flight over oceans 12 miles (19 to 20 km) offshore," Moore said.

"Also, unlike ground-based turbines, there is almost no additional cost for airborne systems offshore because huge platforms are not required to support the structure or resist large tower bending moments.

"NASA Wallops could have an important role as an airborne wind testing center with access to offshore wind profiles in controlled airspace."

What all this has to do with NASA goes beyond the agency's commitment to help the nation with clean energy solutions. It also involves some of the core capabilities of the agency in aeronautics, composite materials and air space management.

"We've shown in the past that NASA's expertise can help broker and bring an understanding to the FAA as to how these technologies can map into constructive purposes," said Moore, who has met with wind power energy industry leaders, as well as officials from the National Renewable Energy Laboratory and Department of Energy in undergoing this project.

It's why he's undertaking the project: to bring a sense of what's going to be necessary to harvest power from the wind.