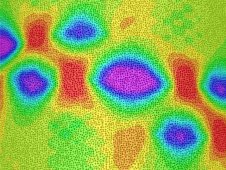 This graphic from the video image correlation system shows shell wall displacement at the end of the loading sequence of the March 23, 2001 Shell Buckling Knockdown Factor Test. (NASA) 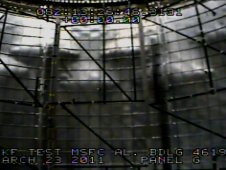 View from a test camera inside the cylinder from the March 23 Shell Buckling Knockdown Factor test at the Marshall Center. (NASA/MSFC) 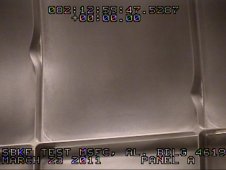 Reinforcing rib stiffeners buckled under the approx. one million pounds of load applied to the test article during the test. (NASA) 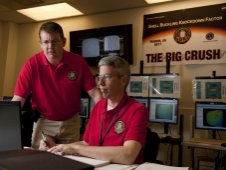 "This type of research is critical to NASA developing a new heavy-lift vehicle," said NASA Administrator Charlie Bolden. "The Authorization Act of 2010 gave us direction to take the nation beyond low-Earth orbit, but it is the work of our dedicated team of engineers and researchers that will make future NASA exploration missions a reality."

The aerospace industry's shell buckling knockdown factors date back to Apollo-era studies when current materials, manufacturing processes and high-fidelity computer modeling did not exist. These new analyses will update essential design factors and calculations that are a significant performance and safety driver in designing large structures like the main fuel tank of a future heavy-lift launch vehicle.

During the test, a massive 27.5-foot-diameter and 20-foot-tall aluminum-lithium test cylinder received almost one million pounds of force until it failed. More than 800 sensors measured strain and local deformations. In addition, advanced optical measurement techniques were used to monitor tiny deformations over the entire outer surface of the test article.

"Launch vehicles are thin walled, cylindrical structures and buckling is one of the primary failure modes," said Mark Hilburger, a senior research engineer in the Structural Mechanics and Concepts Branch at Langley and the principal investigator of the NESC's Shell Buckling Knockdown Factor project. "Only by studying the fundamental physics of buckling through careful testing and analysis can we confidently apply the new knowledge to updated design factors. The outcome will be safer, lighter, more efficient launch vehicles."

Leading up to this full-scale test, the shell buckling team tested four, 8-foot-diameter aluminum-lithium cylinders. Current research suggests applying the new design factors and incorporating new technology could reduce the weight of large heavy-lift launch vehicles by as much as 20 percent.

In the future, the shell buckling team will test carbon-fiber composite structures that are 20-30 percent lighter than aluminum and widely used in the automotive and aerospace industries.