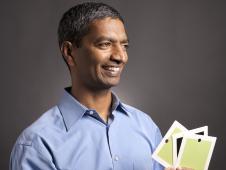 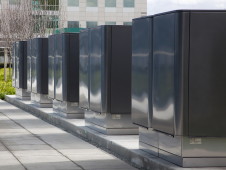 Bloom Energy servers at eBay. Each server is the equivalent size of one parking spot.
Click image for full-resolution.
Photo Credit: Bloom Energy K.R. Sridhar used to spend his time as a researcher at NASA Ames Research Center, Moffett Field, Calif., looking at the sky and dreaming of ways to sustain life on Mars. Now, CEO of Bloom Energy, Sridhar heads a company that just unveiled new technology that could make energy cleaner, cheaper, more reliable and accessible to everyone in the world.

The journey from NASA to Bloom Energy started with Sridhar and a small team of university researchers working to build a fuel cell powered module to go to Mars. When their NASA project ended, the team left academic life, opened a research and development office in NASA Research Park, and began working to commercialize the fuel cell technology with a new company, ION America, which became Bloom Energy.

"NASA is a tremendous environment for encouraging innovation - it's all about solving problems that are seemingly unsolvable. After realizing that we could make oxygen on Mars, making electrons on Earth seemed far less daunting. We're grateful to NASA for giving us a challenge with serendipitous impact for mankind," said Sridhar.

Invented over a century ago, fuel cells have been used in practically every NASA mission since the 1960s. However, they have not gained widespread acceptance because of their inherently high cost. Traditional fuel cell technology used precious metals but this technology uses sand. Sand is inexpensive, which Sridhar asserts makes the Bloom Energy technology affordable and easy to mass produce.

As more people consume more energy, Sridhar became aware that the world was heading in the wrong direction. “We would be handing our children and their children a broken planet," ventured Sridhar. “I didn’t want to sit on the sidelines and do nothing." Sridhar believed that conservation alone was not enough and that there was a “calling to our generation to find a different way to create energy."

"To make clean reliable energy affordable for everyone in the world," is the mission of Bloom Energy. "One in three humans lives without power," Sridhar asserted. "Energy demand exceeds supply. Global population is growing quickly." Keeping these three facts in mind, Sridhar is working to bring energy to parts of the world that don’t have power.

On Feb. 24, 2010, Bloom Energy held a press conference at the eBay town hall in San Jose, Calif. “This is a day that I have been looking forward to for a long time,” Sridhar commented. Representatives from companies that were early adapters attended, including Larry Page from Google, Inc., Bill Simon from Walmart, Brian Kelly from The Coca-Cola Company, and John Donahoe of eBay, Inc.

Former secretary of state, Colin Powell, and Arnold Schwarzeneggar, California governor, also attended the event. “This technology is an excellent example of the wave of green innovation washing over the state of California,” said Schwarzeneggar. "He [Sridhar] is someone shaping the future of energy not just for California but for the world." Karen Hanner
Ames Research Center, Moffett Field, Calif.
› Back To Top