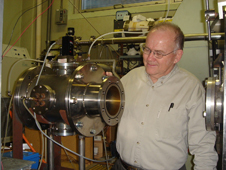 Beneficial uses of atomic oxygen are researched at NASA's Glenn Research Center in Cleveland. Bruce Banks, supporting the Space Environment and Experiments branch, is pictured in the lab. Photo Credit: NASA Imagine a priceless painting that has been all but ruined by a ravaging storage room fire. The beautiful paint, painstakingly applied in a multitude of colors, is obscured by layers of dark soot. A masterpiece appears to be irrevocably destroyed.

But all is not lost. The painting is placed in a vacuum chamber and an invisible, powerful substance called atomic oxygen is created inside the chamber. Over the course of hours or days, slowly but surely, the grime dissolves away, and the colors begin to re-emerge. With a touch of freshly sprayed clear varnish, the painting returns to its glory.

It may seem like magic, but it is science. A scientific method developed by researchers at NASA's Glenn Research Center uses atomic oxygen to save and restore works of art that would have been irreparably damaged. It can also completely sterilize surgical implants intended for human bodies, dramatically reducing the risk of inflammation. It can improve glucose monitoring devices for diabetic patients, using a fraction of the amount of blood that was previously required for testing to manage their disease. It can texture the surfaces of polymers to invite bone cell adhesion, leading to a variety of medical advances.

And this powerful substance can be created out of thin air.

Oxygen comes in several different forms. The oxygen that we breathe is called O2—that is, it is comprised of two atoms of oxygen. O3 is ozone, such as occurs in Earth's upper atmosphere, and O (one atom), is atomic oxygen.

Atomic oxygen doesn't exist naturally for very long on the surface of Earth, as it is very reactive. But in space, where there is plenty of ultraviolet radiation, O2 molecules are more easily broken apart to create atomic oxygen. The atmosphere in low Earth orbit is comprised of about 96% atomic oxygen. In the early days of NASA's space shuttle missions, the presence of atomic oxygen caused problems.

"In the first few shuttle flights, materials looked frosty because they were actually being eroded and textured," says Bruce Banks, a senior physicist with Alphaport, supporting the Space Environment and Experiments branch at Glenn. "Atomic oxygen reacts with organic materials on spacecraft exteriors, gradually damaging them."

Glenn Research Center was asked to investigate the damage caused to NASA spacecraft by atomic oxygen. The researchers not only invented methods to protect spacecraft from atomic oxygen; they also discovered a way to harness the potentially destructive power of atomic oxygen and use it to improve life on Earth. 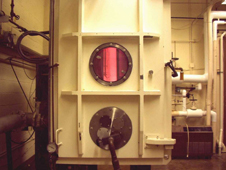 Atomic Oxygen is created in a lab by separating O2 (the oxygen that naturally appears in Earth’s atmosphere) into O (one atom of oxygen—otherwise known as atomic oxygen). Photo Credit: NASA When spacecraft travel in low Earth orbit (where crewed vehicles and the International Space Station fly), the atomic oxygen formed from the residual atmosphere can react with spacecraft surfaces, causing damage to the vehicle. When the solar arrays were designed for the Space Station, there was a concern that the solar array blankets, which are made of polymers, would quickly erode due to atomic oxygen.

NASA developed the solution. The team at Glenn designed a thin-film coating for the solar arrays, which was immune to the reaction with atomic oxygen. Silicon dioxide, or glass, has already been oxidized so it cannot be damaged by atomic oxygen. The researchers created a coating of a clear silicon dioxide glass that is so thin, it is flexible. This protective coating adheres to the polymers of the array and protects the arrays from erosion, while not sacrificing any thermal properties. The coatings continue to successfully protect the Space Station arrays, and were also used for the arrays (supplied by the United States) for Mir.

"It has been successfully flying in space for more than a decade," Banks says. "It was designed to be durable."

Through the hundreds of tests that were part of developing the coating that was resistant to atomic oxygen, the Glenn team became experts in understanding how atomic oxygen works. The team imagined other ways that atomic oxygen might be used in a beneficial manner, rather than the destructive influence it is in space.

"We became aware of how the surface chemistry changes, how it [atomic oxygen] removes organic materials… it can remove anything organic that's a hydrocarbon, that might not be easily removed by normal chemicals," Banks says.

The team discovered a wealth of ways atomic oxygen might be employed. They learned that it turns the surfaces of silicones into glass, which can be helpful in creating components that need to form a tight seal without sticking to each other. This treatment process is being developed for use on seals for the International Space Station. They also learned that it can restore and save damaged artwork, enhance materials used on aircraft and spacecraft, and benefit humans through a wealth of biomedical applications.

There are different ways of applying atomic oxygen to surfaces. Most frequently, a vacuum chamber is used. These chambers range from the size of a shoebox to a chamber that is 4 feet by 6 feet by 3 feet. Microwaves or radiofrequency waves are used to break the oxygen into oxygen atoms—atomic oxygen. A sample of polymer is placed in the chamber and its erosion is measured to determine the level of atomic oxygen inside the chamber.

Another method of applying atomic oxygen is to use a portable, pencil beam machine that directs a flow of atomic oxygen to a specific target. It might be possible to create a bank of these beams to cover a larger surface area.

A variety of surfaces can be treated using these methods. As research into atomic oxygen has continued, various industries have learned of the work. Partnerships, collaborations and spinoffs have begun—and in many cases, completed—in multiple commercial areas. 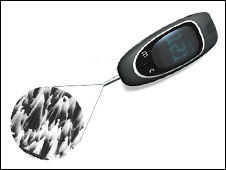 Atomic oxygen has been used to texture the surface of polymers that may fuse with bone. The surface of smooth polymers typically discourages adhesion with bone forming cells, but the atomic oxygen creates a surface where adhesion is enhanced. There are a variety of ways this could be beneficial to osteopathic health.

Atomic oxygen can also be used to remove biologically active contaminants from surgical implants. Even with modern sterilization practices, it is difficult to remove all debris from bacterial cells (called endotoxins) from the implants. These endotoxins are organic but are not living; therefore, sterilization may not remove them. They can cause inflammation once implanted, and this inflammation is one of the primary causes for pain and potential loosening complications in patients who receive the implant.

Atomic oxygen cleans the implant and removes all traces of organic materials, which greatly diminishes the risk of post-operative inflammation. This leads to better results (and lessened pain) for patients who require surgical implants.

The technology is also being used for glucose sensors and other biomedical monitors. These monitors use acrylic optical fibers that are textured by atomic oxygen. This texturing allows the fiber to filter out red blood cells, letting serum in the blood more effectively contact the chemical sensing component in the monitor.

"It makes the test more accurate… while requiring a fraction of the blood that's normally required to do blood sugar testing. You can prick almost anywhere on your body and get enough blood to register the sugar level of the blood," says Sharon Miller, an electrical engineer in the Space Environment and Experiments Branch at NASA's Glenn Research Center. 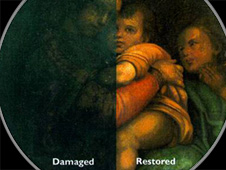 Damaged works of art can be restored and saved using atomic oxygen. This before and after image of "Madonna of the Chair" shows the dramatic results that are possible. Photo Credit: NASA When works of art are compromised, atomic oxygen can be used to remove the organic contaminants without damaging the actual painting. The process removes all organic materials, such as carbon or soot, but it typically doesn't affect the paint. The pigments in paint are mostly inorganic, and have already been oxidized, meaning that atomic oxygen doesn't damage them. Pigments that are organic can also be preserved, through carefully timing the exposure to atomic oxygen. The canvas is also safe, as the atomic oxygen only reacts on the surface of the painting.

Artwork can be placed in a vacuum chamber where atomic oxygen is created. Depending on the amount of damage, the painting can remain in the chamber anywhere from 20 hours to 400 hours. The pencil beam can also be used to specifically target a damaged area in need of restoration, eliminating the need to place the artwork in a vacuum chamber.

Museums, galleries and churches have come to Glenn to save and restore their works of art. Glenn has demonstrated the ability to repair a fire-damaged painting by Jackson Pollack, removed lipstick from an Andy Warhol painting and saved smoke-damaged paintings at St. Stanislaus Church in Cleveland. The Glenn team has used atomic oxygen to restore a piece that was previously thought to be irreparable: a centuries-old, Italian copy of a painting by Raphael called "Madonna of the Chair," which belongs to St. Alban's Episcopal Church in Cleveland. 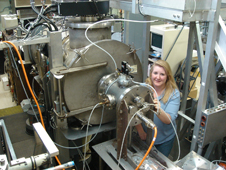 The Atomic Oxygen Exposure Vacuum Chamber at Glenn enables cutting-edge research into the uses of atomic oxygen. Deborah Waters, of the Space Environment and Experiments Branch, works with the End Hall oxygen ion source. Photo Credit: NASA NASA has worked, on a reimbursable basis, with a multitude of parties interested in atomic oxygen. Glenn has worked with individuals whose treasured artwork was damaged in home fires, and they have worked with corporations that are investigating atomic oxygen in biomedical applications, such as LightPointe Medical of Eden Prairie, Minn. They have discovered many applications for atomic oxygen, and look forward to investigating even more.

The team hopes to continue researching ways that atomic oxygen can be of use, and to further explore the promising areas that they have already identified. Many of the technologies have been patented, and the Glenn team hopes that companies will license and commercialize some of the technologies, so they may be of even more use to society.

"It would be nice to see more companies using technology derived from the nation's efforts in aerospace," Banks says.

"It is very rewarding to work with because you see a benefit right away. It can have an immediate impact and benefit to the public," Miller says.