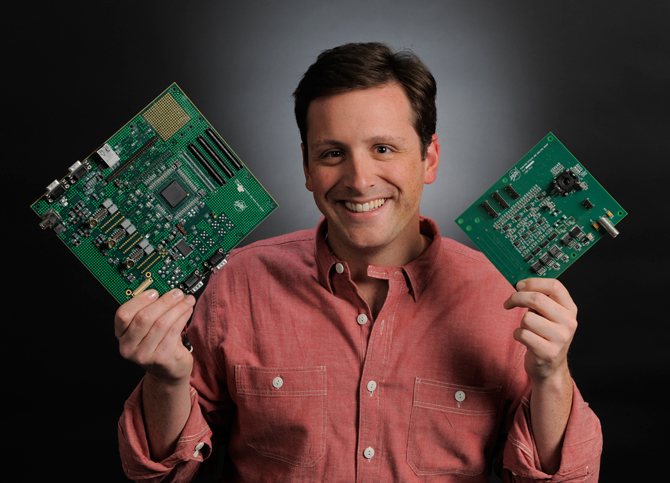 › View larger
Goddard technologist Jonathan Pellish holds a Goddard-developed digital test board (larger) and the IRAD-developed daughter card containing the analog-based data-processing integrated circuit. The daughter card snaps into the digital test board and will be used to test a number of spaceflight processing applications. Credit: NASA/Goddard/Pat Izzo
It’s a digital world. Or is it?

NASA technologist Jonathan Pellish isn’t convinced. In fact, he believes a computing technology of yesteryear could potentially revolutionize everything from autonomous rendezvous and docking to remotely correcting wavefront errors on large, deployable space telescope mirrors like those to fly on the James Webb Space Telescope.

So convinced is he of its potential, Pellish is meeting with scientists and engineers to explain the technology’s capabilities and is using fiscal year 2013 NASA Center Innovation Fund resources to build printed circuit boards that researchers can use to test the technology’s performance for a range of scientific applications. Pellish works at NASA's Goddard Space Flight Center in Greenbelt, Md. He also has carried out preliminary radiation-effects studies to see how the technology’s architecture holds up under the extreme environment encountered in space.

“I wouldn’t do it unless I really believed in it,” Pellish added. “This is one of the few things I’ve seen that is really different than what others are trying to do. I think this technology could fundamentally change the way we carry out onboard processing.”

The new technology is an analog-based microchip developed with significant support from the Defense Advanced Research Projects Agency (DARPA). Instead of relying on tiny switches or transistors that turn on and off, producing streams of ones and zeroes that computing systems then translate into something meaningful to users, the company’s new microchip is more like a dimmer switch. It can accept inputs and calculate outputs that are between zero and one, directly representing probabilities, or levels of certainty.

“The technology is fundamentally different from standard digital-signal processing, recognizing values between zero and one to accomplish what would otherwise be cost prohibitive or impossible with traditional digital circuits,” Pellish said.

The processor’s enhanced performance is due to the way the technology works, he explained. While digital systems use processors that step through calculations one at a time, in a serial fashion, the new processor uses electronic signals to represent probabilities rather than binary ones and zeros. It then effectively runs the calculations in parallel. Where it might take 500 transistors for a digital computer to calculate a probability, the new technology would take just a few. In other words, the microchip can perform a calculation more efficiently, with fewer circuits and less power than a digital processor — attributes important for space- and power-constrained spacecraft instruments, Pellish said.

Although “there has been an overwhelming amount of positive support for the technology within Goddard” since Pellish began introducing colleagues to its capabilities, he is the first to concede that the technology isn’t appropriate for all space applications.

Because of its efficiency and inherent design, however, it’s especially ideal for computing fast Fourier transforms (FFTs), and more particularly the discrete Fourier transform, a ubiquitously used mathematical algorithm in digital-signal processing. Among other things, Fourier transforms decompose signals into their constituent frequencies and are used to generate and filter cell-phone and Wi-Fi transmissions as well as compress audio, image and video files so that they take up less bandwidth.

Among other products, the company has developed an analog-based integrated circuit geared specifically for computing Fourier transforms. The team will use the technology, which the company donated, to assemble several custom circuit boards. “We’ll take the hardware and see what it can do with our data and applications,” Pellish explained.

One of the first applications the group plans to target with a version of the FFT integrated circuit is wavefront sensing and control, the computational technique for aligning multiple mirror segments, like those that are flying on the Webb telescope, so that they operate as a single mirror system.

In addition, Jeffrey Klenzing, who works with Goddard’s Space Weather Laboratory, wants to evaluate the technology’s use for on-board data processing, particularly for studies of the sun. “For a typical sounding rocket application, we send all data down and perform fast Fourier transforms on the ground. However, for satellite missions, this is not feasible given limited telemetry,” Klenzing said. “A chip for performing rapid, reliable FFTs would be very useful for such heliophysics missions particularly with the push toward smaller, low-power satellites such as CubeSats and nanosats.”

Pellish also believes autonomous rendezvous and docking and other applications requiring precise locational information would benefit from the analog-based technology. “We’re trying to create a new market at NASA for analog processing. I believe it will give us a competitive edge. If we can push this, it could revolutionize how we do onboard data processing.”