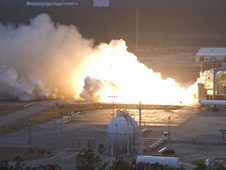 Test firing of the AJ26 engine for Orbital Sciences Corp.'s Taurus II launch vehicle at NASA's Stennis Space Center in Mississippi on Dec. 17, 2010.
Image Credit: NASA
› Full Size Image How long is a minute? It is longer than you think when it is filled with fire, steam and noise – lots of noise.

On Dec. 17, at NASA's John C. Stennis Space Center, a team of operators from Stennis, Orbital Sciences Corporation and Aerojet filled 55 seconds with all three during the second verification test fire of an Aerojet AJ26 rocket engine. Once verified, the engine will be placed on a Taurus II space vehicle and used to launch a cargo supply mission to the International Space Station.

It is all part of NASA’s effort to partner with commercial companies to provide space flights through the Commercial Orbital Transportation Services joint research and development project. Through that program, Orbital has agreed to provide eight cargo supply missions to the space station by 2015. Stennis has partnered with Orbital to test the engines that will power the missions.

So, when Orbital’s Taurus II space vehicle lifts off, it will do so on engines proven flight worthy at Stennis. That is a big responsibility, but it is one which engine test personnel at Stennis are used to filling. They tested engines for every manned Apollo space flight and all of the engines used on more than 130 space shuttle missions.