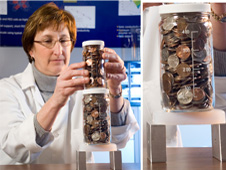 Aerogels are extremely porous and low in density, but can be made to be very strong with new technology developed at NASA. Here, Mary Ann Meador of NASA's Glenn Research Center demonstrates the strength of new aerogels. Image credit: NASA. Picture preparing a bowl full of a sweet, gelatin dessert. The gelatin powder is mixed with hot water, and then the mixture is cooled in a refrigerator until it sets. It is now a gel. If that wiggly gel were placed in an oven and all of the moisture dried out of it, all that would be left would be a pile of powder.

But imagine if the dried gelatin maintained its shape, even after the liquid had been removed. The structure of the gel would remain, but it would be extremely light due to low density. This is precisely how aerogels are made.

Aerogels are among the lightest solid materials known to man. They are created by combining a polymer with a solvent to form a gel, and then removing the liquid from the gel and replacing it with air. Aerogels are extremely porous and very low in density. They are solid to the touch. This translucent material is considered one of the finest insulation materials available.

Although aerogels were first invented in the 1930s, NASA's Glenn Research Center in Cleveland has invented groundbreaking methods of creating new types of aerogels that could change the way we think about insulation. 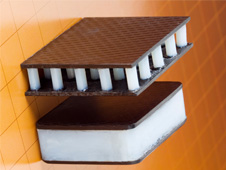 Aerogels are created by removing moisture from a gel while maintaining the gel structure. The resulting material provides very effective insulation. Image credit: NASA. Since their invention, aerogels have primarily been made of silica. The silica is combined with a solvent to create a gel. This gel is then subjected to supercritical fluid extraction. This supercritical fluid extraction involves introducing liquid carbon dioxide into the gel. The carbon dioxide surpasses its super critical point, where it can be either a gas or a liquid, and then is vented out. This exchange is performed multiple times to ensure that all liquids are removed from the gel. The resulting material is aerogel.

"That is the key step that makes an aerogel different from other porous materials," says Mary Ann Meador, a research chemical engineer and team lead for aerogels at Glenn. "Maintaining the gel structure is the most important thing."

Aerogels provide very effective insulation, because they are extremely porous and the pores are in the nanometer range. The nano pores aren't visible to the human eye. The existence of these pores makes the aerogel so adept at insulating.

"The pores are so small, and gas phase heat conduction is very poor," Meador says. "Molecules of air cannot travel through the aerogel, so there is poor heat transfer through the material."

Traditional silica-based aerogels have been successfully used in many applications, such as providing insulation on a Mars Rover. They have also been used in many commercial products. When aerogels are used for commercial purposes, they are typically in pellet form or in a composite with other materials. Aerogels have been combined with batting to create insulating "blankets," as well as filled in between panes of glass to create translucent panels for day-lighting applications. 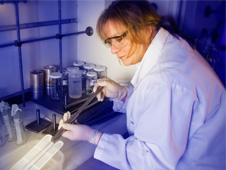 NASA has created aerogels made entirely of polymers. These extremely strong and flexible aerogels can be made into a bendable film. Here, Stephanie Vivod of Glenn creates aerogels using new methods. Image credit: NASA. NASA, along with industry partners, has investigated the use of different types of aerogels for multiple uses. With funding from NASA's Fundamental Aeronautics Program (Hypersonics and Subsonic Fixed Wing Projects) and the Exploration Systems Mission Directorate, NASA's Glenn Research Center has developed two cutting-edge methodologies that revolutionize aerogel technology.

The first innovation is a method of creating aerogels that are reinforced by polymers. The method changes the surface of the gel as it reacts with a polymer. The result is that the interior surface of the aerogel gets a thin layer of polymer, which greatly strengthens the aerogel.

"If you were to compare a polymer-enforced silica aerogel with the same density silica gel, the polymer reinforced aerogel is about two orders of magnitude stronger," Meador says.

These polymer-enhanced aerogels offer the same insulation properties as typical aerogels and can be translucent. They share the same positive attributes of silica aerogels, and are much less fragile. The Glenn team has created many different aerogels featuring different polymers using their patented method. Glenn has also collaborated with Aspen Aerogel of Northborough, Mass. to create a polymer-enhanced aerogel that was combined with fibers to create a new product.

The second innovation is a method of creating aerogels made completely of polymers. These polymer-based aerogels are extremely strong and flexible. They can also be made into a bendable thin film. 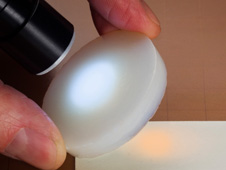 NASA developed ways of creating aerogels that are polymer-reinforced. These aerogels are stronger and can be translucent. Image credit: NASA. The Glenn team is currently working on a NASA project called the Hypersonic Inflatable Aerodynamic Decelerator (HIAD). The HIAD is an inflatable reentry vehicle that is folded and stowed inside a launch vehicle. Prior to entering the atmosphere, the HIAD is inflated and becomes rigid. This helps the spacecraft slow down, safely descend and land on Earth, Mars, or any other planet that has an atmosphere.

The HIAD enables larger masses to be carried through the atmosphere more slowly and safely, and it reduces the heat to which the vehicle is subjected. The HIAD is covered by a Flexible Thermal Protection System, which uses aerogels as an insulator to protect the payload.

The thin film polymer-based aerogel is well suited to the needs of the HIAD. The HIAD (funded by the Hypersonics Project of the Fundamental Aeronautics Program) is scheduled to flight test in 2012. An important component will be the Flexible Thermal Protection Systems (funded by the Hypersonics Project and the Space Technology Program under the NASA Chief Technologist). The Flexible Thermal Protection Systems use baseline aerogel insulation blankets, created by Aspen Aerogels. Subsequent test launches may include the new thin film polymer-based aerogel as an improvement over the baseline insulation.

"The project would like an aerogel that is more flexible, more foldable and doesn't dust, doesn't shed insulation particles, so it is not a hazard or messy to handle. In response to that, we started looking at different kinds of polymers and techniques that could make that sort of aerogel more flexible," Meador says.

The team determined that the presence of silica in an aerogel precluded the ability of an aerogel to be flexible, so they started exploring ways to create an aerogel made completely with polymers. They developed a method of creating polymer based aerogels that are completely flexible, and can be made into an extremely thin film—a capability not previous available. These aerogels are also stable even when subjected to high temperatures.

The polymer-based aerogel is 85-95% porous, meaning it offers the same advantages of traditional aerogels. It is equally light in weight, and has the same properties of thermal conductivity as silica based aerogels. But these aerogels offer unprecedented flexibility, along with their durability and strength, and the ability to be made into a thin film.

"I was amazed and surprised when we determined it could be made into a flexible thin film," Meador says. "It was a 'whoa' moment! It was better than we expected." 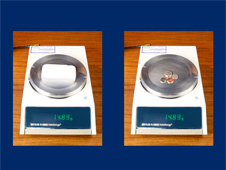 The newly developed aerogels are extremely light and can be made to be very thin. These aerogels could be used in myriad applications in space and on Earth. Image credit: NASA. The thin films, which are fabricated through a collaboration with the University of Akron in Akron, Ohio, have also been sent to other government agencies and NASA centers, which has garnered interest in the technology.

"Usually when people see them, they say 'Wow, this is an aerogel?'" Meador says.

Other NASA centers have expressed interest in further exploring these thin polymer aerogels, for applications like cryogenics or in the next space suit. Polymer aerogels are ideally suited for use in a vacuum, like in space, as well as in different gravity scenarios, such as the moon or other planets.

Governmental agencies are also interested in exploring the thin polymer aerogels for use in shelter applications, such as insulated tents. Industry has also taken notice, with possible applications in refrigeration, building and construction, updating historical structures, and many other insulation needs, especially when there isn't a lot of room and smaller, more effective insulation is needed.

Aerogels and the Future

Polymer-enhanced aerogels and polymer-based aerogels have numerous potential applications, both in space, on distant planets and on our own Earth. They are light, durable and extremely effective at insulating and preventing heat transfer. NASA has taken aerogels to the next level, beyond what was previously imagined, and uncovered a world of possibilities for this versatile material.