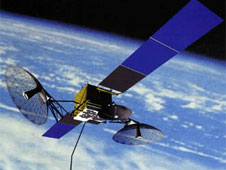 The Tracking and Data Relay Satellite System transmits voice, television, and data between spacecraft and control centers on Earth. Credit: NASA.
Learn about TDRS in the
"This Week @NASA" Vodcast
Twenty-five years ago, NASA inaugurated a new era in spacecraft communications with the launch of the first Tracking and Data Relay Satellite, or TDRS. This space-based system ultimately replaced an extensive network of ground tracking stations deployed for the Apollo missions and significantly increased the time available to mission operators to contact their flight vehicles.

Perched 22,300 miles above the equator, the satellite rotated Earth at the same speed and direction that the Earth turns. Relative to a point on Earth, TDRS appeared to remain stationary. From that geosynchronous orbit, it beamed communications from Earth to other orbiting spacecraft and back, establishing itself as a reliable resource for NASA's space shuttle and other customers.

TDRS-1 provided a link for the first wireless phone call between the North Pole and the South Pole, and the first live webcast from the North Pole. It also was the first satellite to connect to the Internet. 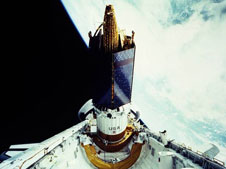 In April 1983, the first Tracking and Data Relay Satellite, TDRS-1, was launched from space shuttle Challenger's payload bay on mission STS-6. Credit: NASA.
View Full Size Image "When many people look at the TV and see beautiful pictures coming from the shuttle or space station, they take communications for granted," said Badri Younes, NASA deputy associate administrator for Space Communications and Navigation. "They don’t know the capabilities that NASA leverages in getting this data down to the ground."

Over the last 25 years, the TDRSS network has brought stunning images from the Hubble Space Telescope to Earth. It has delivered pictures, television, voice and data from more than 100 space shuttle missions and the International Space Station. The TDRSS network has delivered large volumes of Earth observation data in support of Mission to Planet Earth and investigations into global climate change.

The TDRS system has evolved over the last 25 years to meet expanding user requirements and provide new services. Meanwhile, the very first TDRS satellite that was deployed by space shuttle Challenger in April 1983 is still on duty today, returning data from the National Science Foundation activities at the Amundsen-Scott South Pole Station in Antarctica.
› Back To Top