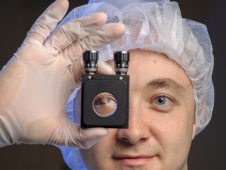 The PIAA system uses two specially designed non-spherical optics to reshape the light in the pupil of the telescope into a new "high-contrast" pupil pattern. Image credit: Dominic Hart 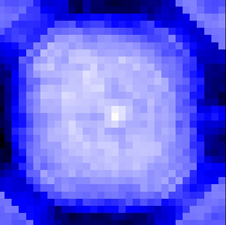 Telescopic optics have tiny imperfections, called aberrations, that cause unclear images or patterns. 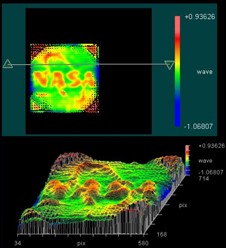 Above image shows a pattern (NASA meatball) made by manipulating the deformable mirrors. Pattern distortions can be corrected by such mirrors that can actively change shape. 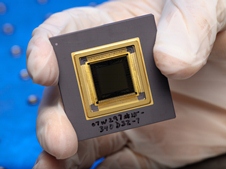 Each mirror is a one-by-one centimeter square that employs a grid of 32-by-32, or 1024 actuators, which can generate any shape desired on the mirror. Image credit: NASA Ames/ Dominic Hart

Although hundreds of planets orbiting other stars have been discovered in the past 15 years, we cannot yet answer the age-old question of whether any of these planets are capable of sustaining life. However, new NASA technology may change that, by giving us our first look at distant planets that not only are the right size and traveling in the temperate habitable zone of their host star, but also show signs of potential life, such as atmospheric oxygen and liquid water.

Research scientists at NASA's Ames Research Center, Moffett Field, Calif., are developing new space telescope optics that won’t just detect planets similar to Earth, but actually take photos of them. To take photos, called “direct imaging,” a new technology will be used called phase-induced amplitude apodization (PIAA). In development since 2003, it is a proof-of-concept and technology tested prototype that is a strong candidate for NASA's upcoming direct imaging exoplanet missions expected to launch in the 2020 decade and beyond.

“By blocking the glare and diffraction from the star, we can start seeing planets that would otherwise be obscured. With this technology, direct imaging confirmation of a habitable zone exoplanet would happen for the first time,” said Ruslan Belikov, a NASA astrophycist and technical lead of the coronagraph technical experiment at Ames.

Today, scientists use primarily indirect methods, such as the “transit method,” to detect extra-solar planets. This method measures the dimming of a star as the planet passes between it and the telescope’s line of sight. By observing the changes in starlight, scientists can determine a planet’s size, its distance from the host star, and the orbital period. This method is currently used by NASA's Kepler mission, which was launched in 2009 to find Earth-size planets in the habitable zone.

In the future, however, a different approach in design and concept may be used to detect common biomarkers of life, such as oxygen and liquid water, on planets similar to Earth orbiting sun-like stars. PIAA is a "direct imaging" technique, which means it takes actual photos of exoplanets. The difficulty in taking such photographs is that the star’s brilliance causes diffraction and glare to overwhelm dim planets in orbit around it. To solve this problem, a telescope needs to suppress the diffraction of the starlight.

The PIAA system uses two specially designed non-spherical mirrors to reshape the light in the pupil of the telescope into a new "high-contrast" pupil pattern. This new high-contrast pupil has the special property of confining all diffraction and glare from the star into a small spot, which virtually blocks all the starlight without appreciably affecting the light from the planet.

Instruments that block starlight are typically called “coronagraphs” (originally invented to block our sun’s brilliance, so we can see its outer gaseous envelope or corona). PIAA is a particularly powerful type of a coronagraph, approaching fundamental physics limits.

Telescopic optics have tiny imperfections, called aberrations, that cause unclear images of the star. Optics completely free of aberrations presently cannot be made, but can be corrected by separate mirrors that can actively change shape. “These mirrors are called deformable mirrors. They counteract the existing distortions of the telescope optics,” explained Belikov.

PIAA, or coronagraphs in general, block the brilliance of starlight, but only can work sufficiently to reveal Earth-size planets if telescope optics are perfect, which they never are. The deformable mirrors correct these imperfections with their wavefront control system. This system "fixes" the imperfect telescope optics to enable the coronagraph to work properly.

At the Ames coronagraph experiment facility, the deformable mirror, built by Boston Micromachines Corp., Mass., is a one-by-one centimeter square that employs a grid of 32-by-32, or 1024 actuators, which can generate any shape desired on the mirror. By controlling the shape of the surface of the error-compensating deformable mirror, the aberrations in the telescope can be reduced sufficiently to allow Earth-size planets to be directly imaged.

“The surface of these deformable mirrors can be set to such high precision that we are incapable of measuring it,” said Belikov.

Although PIAA is approved for further development, it still is awaiting a mission. It is designed for two classes of missions: one for small telescopes, the other for very large telescopes. A small telescope proposal, called Exoplanetary Circumstellar Environments and Disk Explorer (EXCEDE), was selected for technology development for a potential future science mission in September 2011 by NASA’s Explorer program.

Led by the University of Arizona, Tucson and in partnership with Ames and Lockheed Martin Space Science Company, Palo Alto, Calif., EXCEDE will directly image circumstellar dust and debris, and large planets in habitable zones, but not planets similar to Earth. “EXCEDE will do amazing science and may be a precursor to a larger mission, but won't quite capture exoEarths,” said Belikov.“

To see Earth-like planets, a much larger telescope is needed. While the current focus of the Ames Coronagraph Experiment (ACE) team is on the EXCEDE mission, they also are collaborating with NASA’s Jet Propulsion Laboratory (JPL), Pasadena, Calif., to develop coronagraph technology for larger telescopes, capable of observing exo-Earths. Currently, there are two vacuum testbeds at JPL developing different kinds of coronagraph technologies.

“The ACE testbed is in air, not in a vacuum. Our team has advanced the technology for the EXCEDE mission to the point where it is ready for vacuum testing,” said Belikov.

So what are its prospects?

Recently, the National Academy of Sciences produced a 2010 decadal survey that endorsed the Wide-Field Infrared Survey Telescope (WFIRST) mission as its large mission in the 2020 decade. NASA accepted this recommendation.

“Presently, it does not include a coronagraph to do direct imaging of exoplanets. But things can change,” predicted Belikov.

It also seems promising that two 2.4 meter Astrophysics Focused Telescope Assets (AFTA) telescopes were given to NASA last year by another federal agency. If one of these telescopes becomes the WFIRST mission, its telescope size will be larger than originally planned. If this happens, and the mission has a powerful enough coronagraph, it may be able to survey the nearest stars for habitable exoEarths, according to Belikov.

“With sustained funding, NASA will be capable of launching a telescope large enough to find and characterize basically all the habitable planets around our galactic neighborhood, say the nearest hundreds of stars, within the 2030 decade,” concluded Belikov.

For more information about EXCEDE, visit:

For more information about WFIRST, visit:

For more information about NASA, visit: