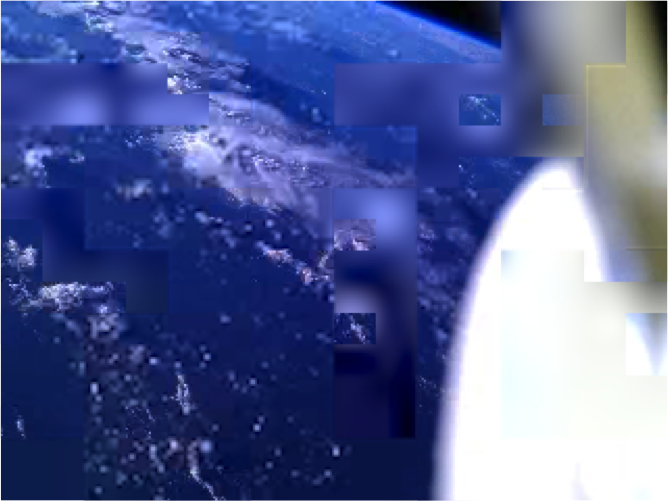 Although the ultimate goal of the PhoneSat mission was to determine whether a consumer-grade smartphone can be used as the main flight avionics for a satellite in space, the three miniature satellites (named Alexander, Graham and Bell) also took pictures of Earth and transmitted these “image-data packets” to multiple ground stations on Earth. Above photo was taken by the PhoneSat-1 (Bell) nanosatellite and reconstructed by the Ames Phonesat Team and multiple amateur radio operators around the world. Image credit: NASA Ames 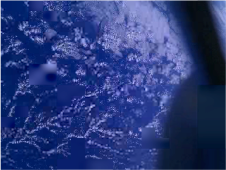 Above image was taken by the PhoneSat-2 (Graham) nanosatellite and the most recently reconstructed by the Ames Phonesat Team and multiple volunteer ham radio operators around the world. Image credit: NASA Ames For about one week, engineers at NASA's Ames Research Center, Moffett Field, Calif., and amateur radio operators around the world collaborated to reconstruct an image of Earth sent to them from three smartphones in orbit. The joint effort was part of NASA's nanosatellite mission, called PhoneSat, which launched on Sunday, April 21, 2013 aboard the Antares rocket from NASA's Wallops Island Flight Facility in Virginia.

Although the ultimate goal of the PhoneSat mission was to determine whether a consumer-grade smartphone can be used as the main flight avionics for a satellite in space, the three miniature satellites used their smartphone cameras to take pictures of Earth and transmitted these "image-data packets" to multiple ground stations. Every packet held a small piece of "the big picture." As the data became available, the PhoneSat Team and multiple amateur ham radio operators, who call themselves "hams," pieced together a high-resolution photograph from the tiny data packets.

"During the short time the spacecraft were in orbit, we were able to demonstrate the smartphones' ability to act as satellites in the space environment," said Bruce Yost, the program manager for NASA's Small Satellite Technology Program. "The PhoneSat project also provided an opportunity for NASA to collaborate with its space enthusiasts. Amateur radio operators from every continent but Antarctica contributed in capturing the data packets we needed to piece together the smartphones' image of Earth from space.”

As part of their preparation for space, the smartphones were outfitted with a low-powered transmitter operating in the amateur radio band. They sent the image information to awaiting hams who worked with the Ames engineers to stitch together multiple, tiny images to restore the complete Earth view.

Piecing together the photo was a very successful collaboration between NASA's PhoneSat team and volunteer amateur ham radio operators around the world. NASA researchers and hams working together was an excellent example of Citizen Science, or crowd-sourced science, which is scientific research conducted, in whole or in part, by amateur or nonprofessional scientists. On the second day of the mission, the Ames team had received over 200 packets from amateur radio operators.

"Three days into the mission we already had received more than 300 data packets," said Alberto Guillen Salas, an engineer at Ames and a member of the PhoneSat team. "About 200 of the data packets were contributed by the global community and the remaining packets were received from members of our team with the help of the Ames Amateur Radio Club station, NA6MF.”

The mission successfully ended Saturday, April 27, 2013, after predicted atmospheric drag caused the PhoneSats to re-enter Earth's atmosphere and burn up.

“The NASA PhoneSat Team would like to acknowledge how grateful we are to the amateur radio community for contributing to the success of this mission,” said Oriol Tintore, an engineer and a member of the PhoneSat Team at Ames who participated in the picture data processing.

The PhoneSat project is a technology demonstration mission funded by NASA’s Space Technology Mission Directorate at NASA Headquarters and the Engineering Directorate at NASA Ames Research Center. The project started in summer 2009 as a student-led collaborative project between Ames and the International Space University, Strasbourg.

These results will encourage further research into applying low-cost terrestrial technologies to space applications and also may open space to a whole new generation of commercial, academic and citizen-space users, according to Yost. For more information about the PhoneSat mission and the participation of the radio amateur:


For more about information about NASA's Small Spacecraft Technology Program and the PhoneSat mission, visit: