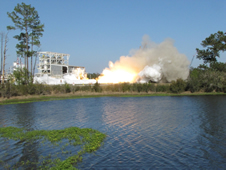 Orbital plans to launch the first of eight scheduled unmanned cargo missions to the ISS in early 2012. Key steps already have been taken toward that goal as Orbital has successfully tested the Aerojet AJ26 engines that will power the first stage of their Taurus II rocket. Tests on each of the engines were performed by a team of Orbital, Aerojet and John C. Stennis Space Center engineers at NASA’s south Mississippi test facility. The latest test was conducted on March 19 on the E-1 Test Stand.

The initial two engines, tested earlier this year, will be delivered to Orbital at the Wallops Flight Facility launch site in Virginia for integration with the Taurus II’s first stage core.

Orbital is developing its Taurus II's cargo logistics system under the joint Commercial Orbital Transportation Services demonstration project with NASA, and is scheduled to carry out its ISS cargo resupply missions under the Commercial Resupply Services contract.
› Back To Top