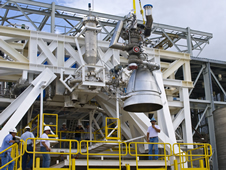 Stennis has partnered with Orbital Sciences Corporation to test the AJ26 engines that will power the first stage of the company's Taurus® II space launch vehicle. Orbital is working in partnership with NASA under the agency's Commercial Orbital Transportation Services (COTS) joint research and development project. The company is under contract with NASA through the Commercial Resupply Services program to provide eight cargo missions to the International Space Station through 2015.

Stennis operators have been modifying their E-1 test facility since April 2009 to test the AJ26 engines for Orbital. Work has included construction of a 27-foot-deep flame deflector trench.


The latest step in the project involved delivery and installation of an AJ26 engine for testing. In upcoming days, operators will perform a series of "chilldown" test, which involves running sub-cooled rocket propellants through the engine, just as will occur during an actual "hotfire" ignition test.

The chilldown tests are used to verify proper temperature conditioning of the engine systems and elapse time required to properly chill the engine, and to measure the quantity of liquid oxygen required to perform the operation.

Once the installed engine passes the chilldown and other qualification tests, it will be removed from the Stennis E-1 test facility. The first actual flight engine then will be delivered and installed for hotfire testing.