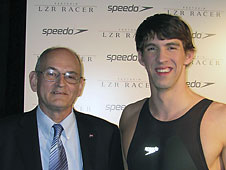 NASA researcher Steve Wilkinson doesn't know that much about swimwear, but he does know a thing or two about drag reduction … how to make something propel through air or water faster and more efficiently.

The swimmer and the researcher met for the first time in New York City at the unveiling of a new product they both had a part in developing. It's called by its manufacturer the "world's fastest swimsuit."

"When I hit the water, I feel like a rocket," said Phelps. "I can't wait to race in it. This is going to take the sport of swimming to a new level."

Phelps and other U.S. athletes may prove that this August at the 2008 Summer Olympics in Beijing. Wilkinson already knows the fabric Phelps will be wearing has gone through a new level of extensive testing at NASA's Langley Research Center in Hampton, Va., and other laboratories. 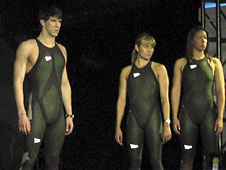 "We evaluated the surface roughness effects of nearly 60 fabrics or patterns in one of our small low speed wind tunnels," said Wilkinson. "We were assessing which fabrics and weaves had the lowest drag."

But how can you test a fabric that's supposed to be used in water in a wind tunnel that uses air? It turns out that air and water obey the same physical laws of motion, so a wind tunnel can simulate similar drag a fabric would experience in water. Testing in air is also less expensive, simpler and offers more testing options than testing in water.

Warnaco Inc., which is the U.S. licensee of the Speedo swimwear brand, approached NASA Langley to test fabric samples, since NASA Langley has researched drag reduction for aircraft and even boats for decades.

"This is the first time I've tested a fabric and there were some challenges involved," said researcher Wilkinson. "It was a challenge to figure out how to get the fabric on a test plate and how to prepare the edges so nothing would interfere with air flow over the fabric. I think we've done a really good job with the help of Speedo coming up with a protocol that lets us to test these fabrics with ease and precision." 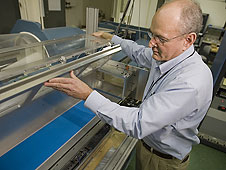 The candidate materials Wilkinson receives from the company come in the form of tubes. He stretches the tubes over a smooth, flat aluminum plate, then tapes down the edges. The plate goes into the small wind tunnel test section. With a flip of a switch, air flows over it. Wilkinson runs the tunnel through a number of wind speeds and, with the help of sensors, measures drag on the surface. He records the data and then sends it on to Speedo researchers.

"It turns out to simulate a swimmer in the water at about two meters per second, we need to run the wind tunnel at about 28 meters per second (about 63 miles per hour), which is well within its capability," added Wilkinson. "The tests have generally shown the smoother the fabric, the lower the drag."

Speedo's research and development team, Aqualab, took those results and used them to help create a new swimsuit that the company says is its most hydro-dynamically advanced swimsuit to date.