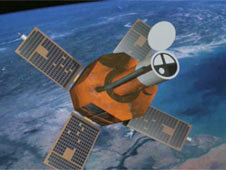 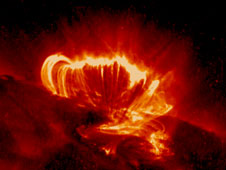 Although launched on April Fools' Day, 1998, TRACE quickly proved its worth, observing – for the first time - an entire cycle of solar activity and imaging dynamic coronal phenomena.

TRACE provided images at five times the magnification of those taken by the Extreme Ultraviolet Imaging Telescope Instrument aboard the Solar and Heliospheric Observatory (SOHO).

Many details of the fine structure of the corona were observed for the first time. Early in its mission, it discovered the fine-scale magnetic features where enhanced heating occurs at the footpoints of coronal loop systems in solar active regions, which later became known as "coronal moss."

In 2001, TRACE observations of astonishing coronal activity were highlighted in the IMAX movie SolarMax.

High spatial resolution observations of the solar corona are now being carried out by NASA''s newest eye on the sun, the Solar Dynamics Observatory, a Goddard-built spacecraft managed by the Science Mission Directorate's Heliophysics Division. SDO's field of view is much larger than TRACE, so that the entire disk of the sun, not a small area, is imaged in every observation.

During its 12 year mission, TRACE produced millions of stunning images and contributed to more than 1,000 scientific publications.

Congratulations to TRACE mission team and numerous other scientists and engineers who contributed the mission’s outstanding success.