Grow Text SizeShrink Text Size
NASA Extends TIMED Mission for Fourth Time
Nine years after beginning its unprecedented look at the gateway between Earth's environment and space, not to mention collecting more data on the upper atmosphere than any other satellite, NASA’s Thermosphere Ionosphere Mesosphere Energetics and Dynamics (TIMED) mission has been extended again.

Before the launch of TIMED, the mesosphere and lower thermosphere/ionosphere -- which help protect us from harmful solar radiation -- had been one of the least explored and understood regions of our environment. 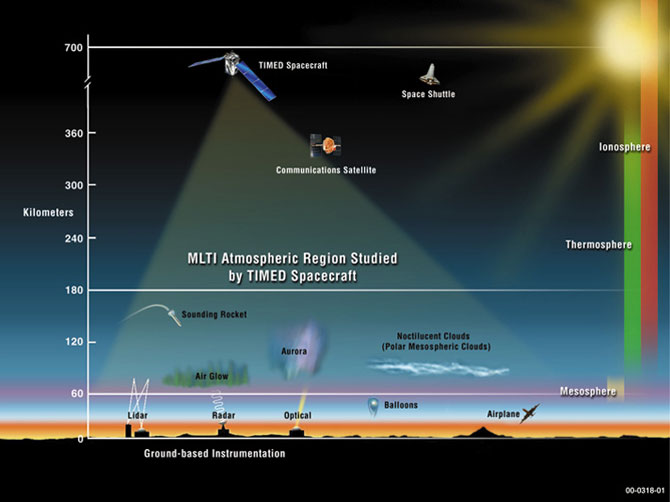 › View larger
The primary science objective of the TIMED mission is to understand the energy transfer into and out of the Mesosphere and Lower Thermosphere/Ionosphere (MLTI) region of the Earth's atmosphere (energetics), as well as the basic structure (i.e., pressure, temperature, and winds) that results from the energy transfer into the region. Credit: NASA

"The middle part of the atmosphere was the part we kind of ignored," says John Sigwarth, the deputy project scientist for TIMED at NASA's Goddard Space Flight Center in Greenbelt, MD. "It's too high for balloons and too low for spacecraft. So the understanding of this middle atmosphere and its impact on the upper atmosphere has been tremendously increased due to TIMED."

The mission will now continue to study the influences of the sun and humans on our upper atmosphere. TIMED began its extended mission on Oct. 1, 2010, and will collect data through 2014. This is its fourth extension since the original 2-year mission began in January 2002. TIMED will focus this time on a problem that has long puzzled scientists: differentiating between human-induced and naturally occurring changes in this atmospheric region. This extension also allows TIMED to continue collecting data for longer than a full 11-year solar cycle.

"The sun is a variable star with an 11 year cycle," says Sigwarth. "So, if things change in the mesosphere, you don't know if it's because the sun changed or because human activity has caused the change. By getting back to the same point in the cycle, we can compare what it was like then, and what it's like now, and see if there's a long term trend of changes that's not solar related." 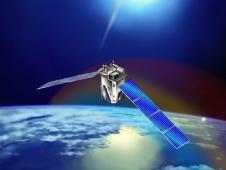 › View larger
Artist's concept of the TIMED spacecraft. Credit: NASA/JPL/APL The key instrument performing this work is known as SABER (or Sounding of the Atmosphere using Broadband Emission Radiometry), built by Hampton University in Hampton, Va. SABER can remotely sense composition and temperature in the mesosphere.

In addition to checking for effects from humans, TIMED scientists would like to understand how cooling temperatures in the middle atmosphere are causing the thermosphere to become less dense and its composition to change. With fewer particles in the thermosphere, there’s less drag on satellites in space, which affects how long spacecraft and space debris stay in orbit – information that must be integrated into calculations for orbit models.

Composition changes in the thermosphere can also alter ionospheric structures that affect radio wave propagation and communications. To help with this is an instrument called SEE (or the Solar EUV Experiment) built at the University of Colo., which looks at the sun's x-rays and extreme ultraviolet rays to see how they impact our atmosphere.

TIMED will also collaborate with NASA’s newest eye on the Sun, the Solar Dynamics Observatory, which provides continuing solar radiation measurements and new views of how solar activity is created.

For more information about the TIMED mission and science, visit: