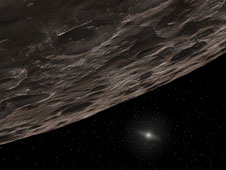 › View larger
Artist's Conception of a Kuiper Belt Object. Credit: NASA/JPL-Caltech/T. Pyle (SSC) The sun isn't kind to objects without atmospheres. Bombarded by solar radiation, the surfaces of some comets, for example, tend to be a charred carbon-black. But the 1,000 objects so far directly imaged in the Kuiper Belt – that swath of icy bodies circling around the sun with Pluto – appear to be a wide range of colors: red, blue, and white.

With scant observations to go on – most of the Kuiper belt objects are just a single pixel of light to the Hubble Space Telescope – few hypotheses have been developed to explain the colors. But a new computer model maps out the right combination of materials and space environment that could produce some of those lovely hues. The model suggests that these objects have many layers, and that the red colors of one particularly interesting group of these objects -- the so-called Cold Classical Kuiper Belt -- could come from organic materials in the layer just under the crust.

"This multi-layer model provides a more flexible approach to understanding the diversity of colors," says John Cooper, a Heliospheric physicist at NASA's Goddard Space Flight Center in Greenbelt, Md. "The model calculates the rate at which energy comes in from radiation and could be causing changes at different depths. So we can define different layers based on that." 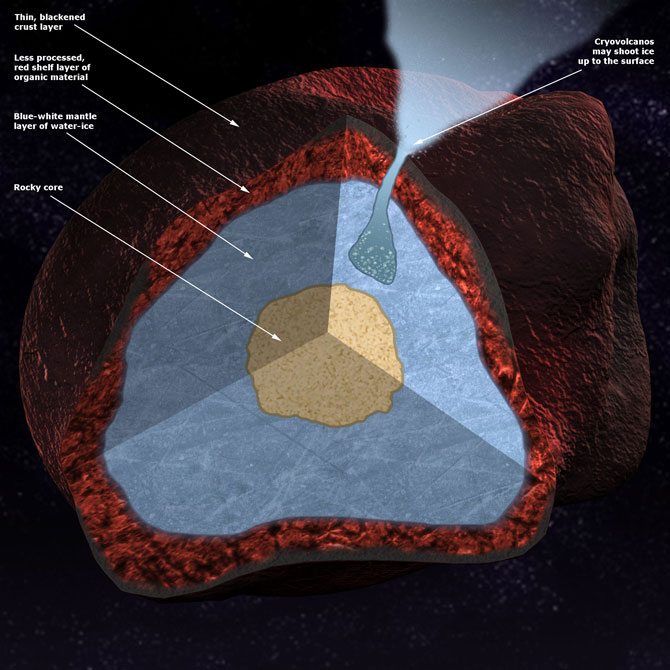 The layers may have different colors, and could also be dynamic. For example, a deeper layer of relatively pure water ice could erupt upwards to form a new uppermost layer, perhaps accounting for the bright icy surface of Eris, the largest of the known Kuiper Belt objects.

Just how these bodies are composed has been a mystery ever since the first observed Kuiper Belt member, a red Cold Classical named 1992 QB1, was discovered in1992, says Cooper, who presented his model in October at the Division for Planetary Sciences meeting of the American Astronomical Society in Pasadena, Calif. Subsequent discoveries of many more objects created instant buzz not only because they helped demote Pluto from a planet to just-another-Kuiper-Belt-object, but because of the Kuiper Belt's mysterious diversity. These bodies sport not just coats of many colors, but also have different sizes and different orbits.

"There's a group called the Cold Classicals that move in relatively circular orbits, and are nearly aligned in the same plane as the orbits of the other planets," says Cooper. "These are all consistently reddish. Other objects, which might range from red to blue to white, tend to move in more elliptical or inclined orbits, which suggest they came from a different location within the solar system early in its history. So, it's possible that the uniformly red Cold Classicals represent a more pristine sample, showing the original composition of the Kuiper Belt with minimal disturbances."

The first thing Cooper had to do was explain why the objects don't have a black crust like, for example, Halley's Comet, since Kuiper Belt bodies are made of hydrocarbons and water ice, and "from lab experiments we know that usually when you take a mixture of ice and carbon and overexpose it to radiation, you get new, dark, tarry materials," says Cooper.

Cooper calculated how the space radiation constantly flowing past the Kuiper Belt should affect different objects depending on where they're located. He believes that the Cold Classicals formed in a sweet spot where plasma ions from the Sun aren't intense enough to overcook the outermost surface to a dark crust.

Instead, the plasma ions have the right amount of energy to simply "sandblast" the topmost layer of the surface -- which is perhaps a millimeter thick -- right off. The sandblasting is partly due to what's known as "ion sputtering" where an incoming plasma ion causes a mini-explosion on the surface, blowing away molecules. Additional erosion could come from impacts of tiny dust grains ejected into the Kuiper Belt region when nearby larger objects collide. Over time, the combined effects of plasma sputtering and meteoritic dust erode away the top layer.

That means that what we see as red must actually be from the exposed second layer. Cooper explains that this second layer is gently cooked by radiation from interstellar space. The radiation can penetrate deeply into the object but also is not overly intense because the sun's magnetic field protects the solar system from its strongest effects. This radiation passes through the crust right into the "shelf" layer where it can induce simple chemical reactions, turning water ice, carbon, methane, nitrogen and ammonia – the basic substances believed to be on these bodies – into organic molecules containing oxygen and carbon like formaldehyde, acetylene and ethane. "Cooking" by radiation can make these molecules appear red to our eyes.

"So if there wasn't any cooking at all, we would just see primordial ice, and the object would appear bright and white," says Cooper. "And if there was too much radiation we would just see black crust, but instead we see a moderately processed shelf layer, which under these circumstances is red."

Cooper's layer model accounts for bright white Kuiper belt objects as well. Further beneath the red shelf would be less-processed water ice in a deep mantle layer that could volcanically erupt through the crust onto the surface, leaving visible global layers or localized patches of bright white ice. "Some of these objects in the Kuiper Belt like Eris are quite bright," he says. "So these may not be dead icy objects, they may be volcanically active over billions of years."

At this point, the layer model is based on limited data from the Voyager mission that has provided information on the energy levels of radiation beyond Neptune. NASA's New Horizons mission will pass through the Kuiper Belt region beyond Neptune's orbit in 2014, getting a good look at Pluto and its largest moon Charon in 2015, and later, if all goes well, one or two other objects. Cooper hopes it will pass close enough to another object to make detailed observations of its surface, which would help confirm what materials are present. New Horizons can provide additional verification simply by confirming that the energy distribution and particles in this region of the solar system jibe with what the model requires.

Not only would such data help explain the many-colored mystery of the Kuiper Belt, but it would support current theories that organic materials might be common in the universe.

"When you take the right mix of materials and radiate them, you can produce the most complex species of molecules," says Cooper. In some cases you may be able to produce the components of life -- not just organic materials, but biological molecules such as amino acids. We're not saying that life is produced in the Kuiper Belt, but the basic chemistry may start there, as could also happen in similar Kuiper Belt environments elsewhere in the universe and that is a natural path which could lead toward the chemical evolution of life."