› View larger image
Not long after Jupiter formed, it got pulled slowly toward the sun, carried on currents of swirling gas. Saturn also got pulled in, and when the two giant planets came close enough to each other, their fates became linked. Their sun-bound death spiral came to a halt when Jupiter was about where Mars is now; then the pair turned and moved away from the sun. The researchers who developed this model of the early solar system call it the "Grand Tack," a reference to the sailing maneuver. Credit: NASA/GSFC Jupiter, long settled in its position as the fifth planet from our sun, was a rolling stone in its youth. Over the eons, the giant planet roamed toward the center of the solar system and back out again, at one point moving in about as close as Mars is now. The planet's travels profoundly influenced the solar system, changing the nature of the asteroid belt and making Mars smaller than it should have been. These details are based on a new model of the early solar system developed by an international team that includes NASA's Goddard Space Flight Center in Greenbelt, Md. The work is being reported in a Nature paper posted on June 5, 2011.

"We refer to Jupiter's path as the Grand Tack, because the big theme in this work is Jupiter migrating toward the sun and then stopping, turning around, and migrating back outward," says the paper's first author, Kevin Walsh of the Southwest Research Institute in Boulder, Colo. "This change in direction is like the course that a sailboat takes when it tacks around a buoy."

According to the new model, Jupiter formed in a region of space about three-and-a-half times as far from the sun as Earth is (3.5 astronomical units). Because a huge amount of gas still swirled around the sun back then, the giant planet got caught in the currents of flowing gas and started to get pulled toward the sun. Jupiter spiraled slowly inward until it settled at a distance of about 1.5 astronomical units—about where Mars is now. (Mars was not there yet.)

"We theorize that Jupiter stopped migrating toward the sun because of Saturn," says Avi Mandell, a planetary scientist at NASA Goddard and a co-author on the paper. The other co-authors are Alessandro Morbidelli at the Observatoire de la Cote d'Azur in Nice, France; Sean Raymond at the Observatoire de Bordeaux in France; and David O'Brien at the Planetary Science Institute in Tucson, Ariz.

Like Jupiter, Saturn got drawn toward the sun shortly after it formed, and the model holds that once the two massive planets came close enough to each other, their fates became permanently linked. Gradually, all the gas in between the two planets got expelled, bringing their sun-bound death spiral to a halt and eventually reversing the direction of their motion. The two planets journeyed outward together until Jupiter reached its current position at 5.2 astronomical units and Saturn came to rest at about 7 astronomical units. (Later, other forces pushed Saturn out to 9.5 astronomical units, where it is today.)

The effects of these movements, which took hundreds of thousands to millions of years, were extraordinary. 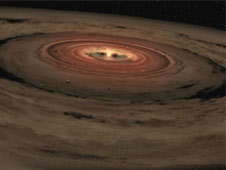 › View larger image
In this artist's conception, gas and dust—the raw materials for making planets—swirl around a young star. The planets in our solar system formed from a similar disk of gas and dust captured by our sun. Credit: NASA/JPL-Caltech Jupiter's Do-Si-Do

"Jupiter migrating in and then all the way back out again can solve the long-standing mystery of why the asteroid belt is made up of both dry, rocky objects and icy objects," Mandell says.

Astronomers think that the asteroid belt exists because Jupiter's gravity prevented the rocky material there from coming together to form a planet; instead, the zone remained a loose collection of objects. Some scientists previously considered the possibility that Jupiter could have moved close to the sun at some point, but this presented a major problem: Jupiter was expected to scatter the material in the asteroid belt so much that the belt would no longer exist.

"For a long time, that idea limited what we imagined Jupiter could have done," Walsh notes.

In the same way, as Jupiter moved away from the sun, the planet nudged the asteroid belt back inward and into its familiar location between the modern orbits of Mars and Jupiter. And because Jupiter traveled much farther out than it had been before, it reached the region of space where icy objects are found. The massive planet deflected some of these icy objects toward the sun and into the asteroid belt.

The time that Jupiter spent in the inner solar system had another major effect: its presence made Mars smaller than it otherwise would have been. "Why Mars is so small has been the unsolvable problem in the formation of our solar system," says Mandell. "It was the team's initial motivation for developing a new model of the formation of the solar system."

But if, as the Grand Tack model suggests, Jupiter spent some time parked in the inner solar system, it would have scattered some material available for making planets. Much of the material past about 1 astronomical unit would have been dispersed, leaving poor Mars out at 1.5 astronomical units with slim pickings. Earth and Venus, however, would have formed in the region richest in planet-making material.

"With the Grand Tack model, we actually set out to explain the formation of a small Mars, and in doing so, we had to account for the asteroid belt," says Walsh. "To our surprise, the model's explanation of the asteroid belt became one of the nicest results and helps us understand that region better than we did before."

Another bonus is that the new model puts Jupiter, Saturn, and the other giant planets in positions that fit very well with the "Nice model," a relatively new theory that explains the movements of these large planets later in the solar system's history.

The Grand Tack also makes our solar system very much like the other planetary systems that have been found so far. In many of those cases, enormous gas-giant planets called "hot Jupiters" sit extremely close to their host stars, much closer than Mercury is to the sun. For planetary scientists, this newfound likeness is comforting.

"Knowing that our own planets moved around a lot in the past makes our solar system much more like our neighbors than we previously thought," says Walsh. "We're not an outlier anymore." Elizabeth Zubritsky
NASA Goddard Space Flight Center
› Back To Top