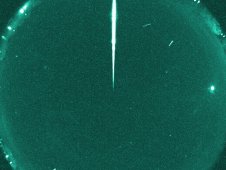 False-color image of a bright fireball meteor over Tullahoma, Tenn., on the night of April 6, 2011. (NASA/MSFC/University of Tennessee Space Institute/Hands-On Science Center) 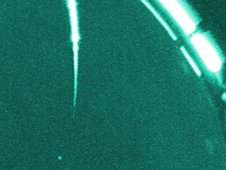 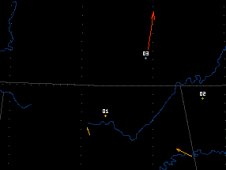 A graph showing the fireball's path. (NASA/MSFC/Meteoroid Environment Office) Did you see a bright flash in the sky over Tullahoma, Tenn., last night? Have we got a scavenger hunt for you...

At approximately 08:21:57 p.m. CDT on April 6, 2011, NASA all-sky meteor cameras located at the University of Tennessee Space Institute, in conjunction with the Hands-On Science Center in Tullahoma, Tennessee, and at the Walker County Science Center in northwest Georgia detected a very bright fireball moving north across the state of Tennessee.

First detected 52 miles above the Arnold Air Force base near Tullahoma, the meteor was brighter than crescent moon and was approximately two feet in diameter, with a weight of 200 lbs. It was last recorded 30 miles above the town of Woodbury, Tenn., moving at a speed of approximately nine miles per second, or 32,400 mph.

The NASA Meteoroid Environment Office has reasonable confidence that some fraction of this meteor survived to the ground as one or more meteorites. Calculations are underway to determine the general impact location, which may lie close to the Kentucky border.

Eyewitnesses to the fireball are encouraged to make a report to the American Meteor Society at www.amsmeteors.com, or to the Meteoroid Environment Office.

More information will be forthcoming at the completion of the impact zone calculations, which may take some time. The orbit indicates that this interloper was from the Asteroid Belt, with an aphelion well beyond the orbit of Mars.

Note: A third NASA camera, located at the Tellus Science Center in Cartersville, Georgia, also recorded this event low on the northern horizon. This data is being used to refine the trajectory determination.