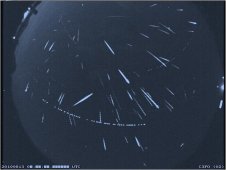 A compilation of events seen during the peak of the 2010 Perseid meteor shower on Aug. 13, 2010, over Huntsville, Ala. (NASA/MSFC/D. Moser, NASA's Meteoroid Environment Office)
Watch the Video 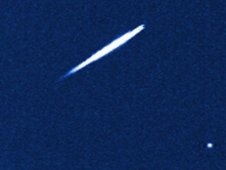 More Information
› Transcript: Up All Night Web Chat
› Flickr Gallery: Perseids 2010
› Wikipedia: Perseids The 2010 Perseid meteor shower is drawing to a close after painting brilliant streaks across the August nighttime skies. This year's shower began around July 17, peaked August 12-13 and will be officially over by August 24.

"The Perseids are a great shower, one I look forward to every year. And this year didn’t disappoint!" said Dr. Bill Cooke, head of NASA's Meteoroid Environment Office, located at the Marshall Space Flight Center in Huntsville, Ala.

More About the Perseids

The Perseid meteor shower has been observed for at least 2,000 years and is associated with the comet 109P/Swift-Tuttle, which orbits the sun once every 133 years or so. Each year in August, the Earth passes through a cloud of the comet's debris. These bits of ice and dust travel around 132,000 mph, burning up about 56 miles overhead in the Earth's atmosphere to create one of the best meteor showers of the year. The shower is called the "Perseids" because the meteors appear to come from the direction of the constellation Perseus.

The Perseids can be of any brightness, but most are as bright as Polaris – the North Star -- or brighter. This meteor shower, however, is known for producing "fireball" meteors that appear at least as bright as the planet Venus as they burn up in the night sky. The bits of Swift-Tuttle debris range in size from one millimeter to several centimeters – the larger the particle hitting the Earth's atmosphere, the brighter the meteor trail. The streak of light in a meteor trail isn’t a view of the particle, but the ionization trail. Ionization happens as the speeding particle causes electrons to be ripped away from atoms in the atmosphere. The meteor trails from a Perseid meteor can be many miles long and remain visible for several seconds.

If you missed the Perseids this year, another good meteor shower is coming in December. The Geminids will happen between Dec. 7-17, with the best viewing after moonset Dec. 13-14. The forecast is for 50-120 meteors per hour at the peak on Dec. 14 at roughly 2 in the morning. The Geminids are named for the constellation Gemini, the direction from which the meteors appear to originate.