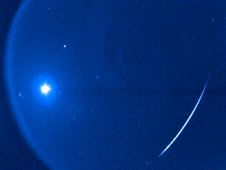 A 2010 Orionid meteor, seen over Western Ontario, Canada. A waxing gibbous moon shines brightly at the left side of the image. (Meteor Physics Group, University of Western Ontario) 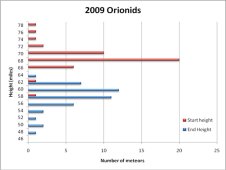 Chart showing Orionid meteor ablation -- or "burn-up" -- altitudes. (NASA's Meteoroid Environment Office/MSFC/Danielle Moser) The most famous of all comets, Comet Halley is noted for producing spectacular displays when it passes near Earth on its 76-year trip around the sun. However, you don't have to wait until 2061 to see a piece of the comet -- you can do it this very week!

Halley's Comet leaves bits of itself behind -- in the form of small conglomerates of dust and ice called meteoroids -- as it moves in its orbit, which the Earth approaches in early May and mid-October. When it does, it collides with these bits of ice and dust, producing a meteor shower as the particles ablate -- or burn up -- many miles above our heads. The May shower is called the Eta Aquarids, as the meteors appear to come from the constellation Aquarius. The October shower has meteors that appear to come from the well-known constellation of Orion the Hunter, hence the name: Orionids.

Orionids move very fast, at a speed of 147,300 miles per hour. At such an enormous speed, the meteors don't last long, burning up very high in the atmosphere. Last year, the NASA allsky cameras at Marshall Space Flight Center in Huntsville, Ala., and in Chickamauga, Ga., recorded 43 definite Orionid meteors. Most of these appeared at an altitude of 68 miles and completely burned up by the time they were 60 miles above the ground, seen in the graph at right.

Even though the peak isn't until October 21, the shower is going on now. The NASA camera systems saw their first Orionid on Oct. 15. Unfortunately, the light from the nearly full moon will wash out the fainter meteors, so expect to see fewer than the 30-per-hour rate you might see under completely dark skies.

The good news is that watching Orionids is easy. Go out into a clear, dark sky after 11 p.m. at night -- your local time -- and lie on a sleeping bag or lawn chair. Look straight up. After a few minutes, your eyes will become dark-adapted, you'll start to see meteors. Any of these that appear to come from Orion will be an Orionid, and therefore represent a piece of Halley's Comet doing its death dive into our atmosphere.

Most folks would consider seeing one or two of these a fair exchange for an hour or so of time. :)

Below is a video of the bright Orionid meteor streaking over Western Ontario on Oct. 17, 2010. The bright object to the left side of the screen is the waxing gibbous moon: