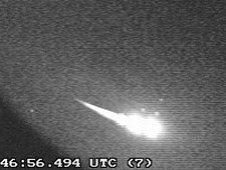 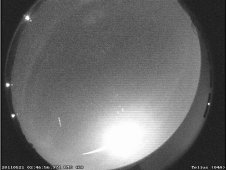 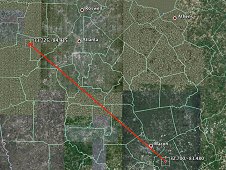 Ground track of meteor's path. (Google) Astronomers at NASA's Marshall Space Flight Center have recorded the brightest fireball meteor seen by their network in almost three years of operation. On May 20, 2011, at 9:47 p.m. CDT, a six-foot diameter fragment of an unknown comet entered the atmosphere approximately 66 miles above the city of Macon, Ga., traveling northwest at a speed of some 24 miles per second (86,000 mph). At this velocity, the boulder-sized "dirty snowball" possessed an energy or striking power somewhere between 500-1000 tons of TNT.

This was seen by many eyewitnesses in Georgia and Alabama; the American Meteor Society has some of the reports here:


It was tracked by two NASA all sky cameras, one located in Chickamauga, Ga., and the other at the Tellus Science Museum in the town of Cartersville, Ga. Analysis of the video data from these cameras enabled the Meteoroid Environment Office to estimate the trajectory, speed, mass and orbit of the meteor. More information on these cameras and a log of recent meteor events can be found at: http://fireballs.ndc.nasa.gov.

Fortunately the atmosphere provided us with excellent protection, as the video below illustrates. Because the video is slowed to one-third of the actual real-time speed, it's easy to spot the large fragments coming off in the wake after the flares.

The video shows four distinct flares caused by the meteor breaking apart in its fiery final few seconds. You can see fragments coming off in the meteor's wake after three of these flares. After a last burst of light, the meteor ablated -- or "burned up" -- 38 miles above the town of Villa Rica, Ga., located on the border between Carrol and Douglas counties in Georgia.