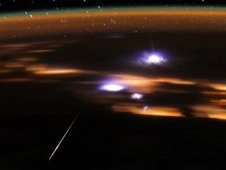 A Lyrid meteor streaks over Earth on the night of April 22, 2012. (NASA/JSC/D. Pettit)
› View large image
› View large image with star field
› View gallery: Flickr, Earth at Night On the night of April 21, the 2012 Lyrid meteor shower peaked in the skies over Earth. While NASA allsky cameras were looking up at the night skies, astronaut Don Pettit aboard the International Space Station trained his camera on Earth. Video footage from that night is now revealing breathtaking images of Earth with meteors ablating -- or burning up -- in the atmosphere.

The downlinked image to the right shows a Lyrid meteor in a six-second exposure, taken on April 22, 2012 at 5:34:22 UT. The International Space Station position was over 88.5 W, 19.9 N at an altitude of 392 km. NASA astronomer Bill Cooke mapped the meteor to the star field -- seen in this annotated image -- and confirmed that the meteor originated from the Lyrid radiant.

The image is rotated so that the north celestial pole (NCP) is roughly in the up direction. The lights of Florida are clearly seen above and to the right of the meteor. Cuba, the Florida Keys and the eastern Gulf Coast shoreline are also visible. Some brilliant flashes of lightning are also prevalent in the image.

Watch a movie of a International Space Station's pass over Earth on the night of April 22, 2012, during the peak of the Lyrid meteor shower. The video is a composite of 316 still frames seen during the flyby:

Cooke and his team from the Marshall Space Flight Center in Huntsville, Ala., are hoping to combine the data from these images with their ground observations and possible Lyrid views from a balloon camera launched to observe the Lyrids on the same night. This will hopefully produce simultaneous space/ground imagery of one or more meteors, which can be used to test ideas and algorithms for processing data gathered by future space-based meteor observatories.