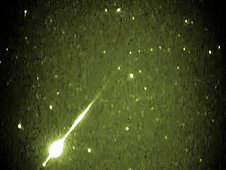 False-color video still from 2002 Leonid meteor shower, seen through a camera operated by the NASA Meteoroid Environment Office at Marshall Space Flight Center. (NASA/MSFC/B. Cooke)
› View video UPDATE: Our coverage of the 2012 Leonid meteor shower is now complete. Thank you for all of the participation! The Leonids occur each year in mid-November -- bits of debris from Comet Tempel-Tuttle. Every 33 years the comet visits the inner solar system and leaves a stream of dusty debris in its wake. Many of these streams have drifted across the November portion of Earth's orbit. Whenever our planet hits one, meteors appear to be flying out of the constellation Leo.

Do YOU Have Some Great Leonid Images?

If you capture the Leonid meteor shower in photos, we invite you to add them to our Flickr "Leonid Meteors" group. This is a great resource to help your images get extra attention from the general public...and perhaps the worldwide media.