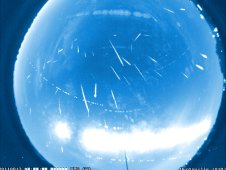 Huntsville all sky camera's meteor view on Aug. 12-13, with a bright full moon "smear" at the bottom. 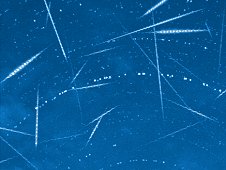 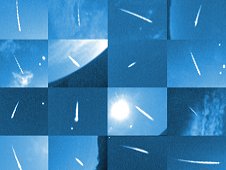 Collage of Perseids taken throughout the evening and early morning of Aug. 10-15.

All images are false-color. (Credits: NASA/MSFC/Meteoroid Environment Office) The summer's best meteor shower peaked last weekend, on Aug. 12-13. Even though the Perseids were hampered by a bright, full moon they were something to behold!

The Perseids have been observed for about 2,000 years. The source of the annual meteor shower is the debris trail left behind comet Swift-Tuttle. Each year in August, the Earth passes through a cloud of the comet's debris. These bits of ice and dust burn up in the Earth's atmosphere.

Most of the Perseid meteors that we observe now were ejected from Swift-Tuttle about 1,000 years ago. Marshall’s meteor camera network captured some of the meteors or "shooting stars" during the peak.

On the night of Aug. 12-13, NASA astronomer Bill Cooke and his team from the Meteoroid Environment Office at Marshall Space Flight Center observed the peak of the Perseid shower via a live Web chat. You can read a transcript of the web chat (PDF, 550 Kb) to learn more about the Perseids: what creates them, their composition, how old they are, how fast they travel and other fascinating facts.