Grow Text SizeShrink Text Size
UV Exposure Has Increased Over the Last 30 Years, but Stabilized Since the Mid-1990s 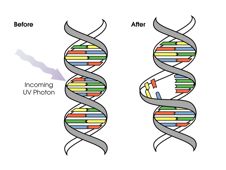 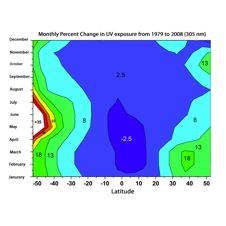 › Larger image
The largest increases in UV (shown in white, red, orange, and yellow) have occurred in the southern hemisphere during April, May and June. In the tropics, increases in UV have been minimal (shown in blue). Though the size of UV wavelengths ranges from 290 to 400 nanometers, 305 nanometer UV is one of the most damaging types for humans. Credit: NASA's Goddard Space Flight Center/Jay Herman

› Larger image
The high latitudes of the southern hemisphere have seen ultraviolet exposure increase by as much as a quarter. The low latitudes have seen little increase, and the mid-and-high latitudes of the northern hemisphere have seen about a five percent increase. Though the size of UV wavelengths ranges from 290 to 400 nanometers, 305 nanometer UV is one of the most damaging wavelengths for humans. Credit: NASA's Goddard Space Flight Center/Jay Herman

› Larger image
Electromagnetic radiation exists in a range of wavelengths, which are delineated into major divisions for our convenience. Ultraviolet-B, from 290 to 320, poses the greatest threat to living organisms, though it represents just a small portion of the spectrum. Credit: NASA's Earth Observatory/Robert Simmon NASA scientists analyzing 30 years of satellite data have found that the amount of ultraviolet (UV) radiation reaching Earth's surface has increased markedly over the last three decades. Most of the increase has occurred in the mid-and-high latitudes, and there's been little or no increase in tropical regions.

The new analysis shows, for example, that at one line of latitude — 32.5 degrees — a line that runs through central Texas in the northern hemisphere and the country of Uruguay in the southern hemisphere, 305 nanometer UV levels have gone up by some 6 percent on average since 1979.

The primary culprit: decreasing levels of stratospheric ozone, a colorless gas that acts as Earth’s natural sunscreen by shielding the surface from damaging UV radiation.

The finding reinforces previous observations that show UV levels are stabilizing after countries began signing an international treaty that limited the emissions of ozone-depleting gases in 1987. The study also shows that increased cloudiness in the southern hemisphere over the 30-year period has impacted UV.

Jay Herman, a scientist at NASA's Goddard Space Flight Center in Greenbelt, Md., stitched together data from several earth observing satellites — including NASA's Aura satellite, NOAA weather satellites, and commercial satellites — to draw his conclusions. The results were published in the Journal of Geophysical Research in February.

"Overall, we're still not where we'd like to be with ozone, but we're on the right track," said Jay Herman. "We do still see an increase in UV on a 30-year timescale, but it's moderate, it could have been worse, and it appears to have leveled off."

In the tropics, the increase has been minimal, but in the mid-latitudes it has been more obvious. During the summer, for example, UV has increased by more than 20 percent in Patagonia and the southern portions of South America. It has risen by nearly 10 percent in Buenos Aires, a city that's about the same distance from the equator as Little Rock, Ark. At Washington, D.C.'s latitude — about 35 degrees north — UV has increased by about 9 percent since 1979.

Despite the overall increases, there are clear signs that ultraviolet radiation levels are on the verge of falling. Herman's analysis, which is in agreement with a World Meteorological Report published in recent years, shows that decreases in ozone and corresponding increases in UV irradiance leveled off in the mid-nineties.

The Many Sides of Radiation

Shorter ultraviolet wavelengths of light contain more energy than the infrared or visible portions of sunlight that reach Earth’s surface. Because of this, UV photons can break atmospheric chemical bonds and cause complex health effects.

Longer wavelengths (from 320 to 400 nanometers) — called UV-A — cause sunburn and cataracts. Yet, UV-A can also improve health by spurring the production of Vitamin D, a substance that's critical for calcium absorption in bones and that helps stave off a variety of chronic diseases.

UV-B, which has slightly shorter wavelengths (from 320 to 290 nanometers), damages DNA by tangling and distorting its ladder-like structure, causing a range of health problems such as skin cancer and diseases affecting the immune system.

"If you go to the beach these days, you're at slightly higher risk of getting skin cancer (without protection)," Herman said, though he noted the risk would have been even greater in the absence of regulations on ozone-depleting substances.

Last year, one of Herman's Goddard colleagues, Paul Newman, published a study showing that the ozone hole likely would have become a year-round fixture and UV radiation would increase 650 percent by 2065 in mid-latitude cities if not for the Montreal Protocol, an international treaty signed in 1987 that limited the amount of ozone-depleting gases countries could emit.

In addition to analyzing ozone and ultraviolet trends, Herman also used satellite data to study whether changes in cloudiness have affected UV trends. To his surprise, he found that increased cloudiness in the southern hemisphere produced a dimming effect that increased the shielding from UV compared to previous years.

In the higher latitudes especially, he detected a slight reduction — typically of 2 to 4 percent -- in the amount of UV passing through the atmosphere and reaching the surface due to clouds. "It’s not a large amount, but it’s intriguing," Herman said. "We aren’t sure what’s behind it yet."

Vitali Fioletov, a Canadian scientist and member of the World Meteorological Organization's advisory group on ultraviolet radiation, agreed that Herman’s findings about cloudiness warrant additional investigation. "I found the cloud effects on the global scale to be the most interesting aspect of the study,” he said. "This isn't something you could see without satellites."