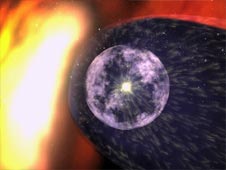 Artist concept of the heliosphere.
›  Larger view
›  Related images from Ulysses media telecon
PASADENA, Calif. -- Data from the Ulysses spacecraft, a joint NASA-European Space Agency mission, show the sun has reduced its output of solar wind to the lowest levels since accurate readings became available. The sun's current state could reduce the natural shielding that envelops our solar system.

"The sun's million mile-per-hour solar wind inflates a protective bubble, or heliosphere, around the solar system. It influences how things work here on Earth and even out at the boundary of our solar system where it meets the galaxy," said Dave McComas, Ulysses' solar wind instrument principal investigator and senior executive director at the Southwest Research Institute in San Antonio, Texas. "Ulysses data indicate the solar wind's global pressure is the lowest we have seen since the beginning of the space age."

This border, called the heliopause, is a bubble-shaped boundary surrounding our solar system where the solar wind's strength is no longer great enough to push back the wind of other stars. The region around the heliopause also acts as a shield for our solar system, warding off a significant portion of the cosmic rays outside the galaxy.

"Galactic cosmic rays carry with them radiation from other parts of our galaxy," said Ed Smith, NASA's Ulysses project scientist at the Jet Propulsion Laboratory in Pasadena, Calif. "With the solar wind at an all-time low, there is an excellent chance the heliosphere will diminish in size and strength. If that occurs, more galactic cosmic rays will make it into the inner part of our solar system."

Galactic cosmic rays are of great interest to NASA. Cosmic rays are linked to engineering decisions for unmanned interplanetary spacecraft and exposure limits for astronauts traveling beyond low-Earth orbit.

"The sun cycles between periods of great activity and lesser activity," Smith said. "Right now, we are in a period of minimal activity that has stretched on longer than anyone anticipated."

Ulysses was the first mission to survey the space environment over the sun's poles. Data Ulysses has returned have forever changed the way scientists view our star and its effects. The venerable spacecraft has lasted more than 17 years, or almost four times its expected mission lifetime. The Ulysses solar wind findings were published in a recent edition of Geophysical Research Letters.

The Ulysses spacecraft was carried into Earth orbit aboard space shuttle Discovery on Oct. 6, 1990. From Earth orbit it was propelled toward Jupiter, passing the planet on Feb. 8, 1992. Jupiter's immense gravity bent the spacecraft's flight path downward and away from the plane of the planets' orbits. This placed Ulysses into a final orbit around the sun that would take it over its north and south poles.

The Ulysses spacecraft was provided by ESA, having been built by Astrium GmbH (formerly Dornier Systems) of Friedrichshafen, Germany. NASA provided the launch vehicle and the upper stage boosters. The U.S. Department of Energy supplied a radioisotope thermoelectric generator to power the spacecraft. Science instruments were provided by U.S. and European investigators. The spacecraft is operated from JPL by a joint NASA-ESA team.