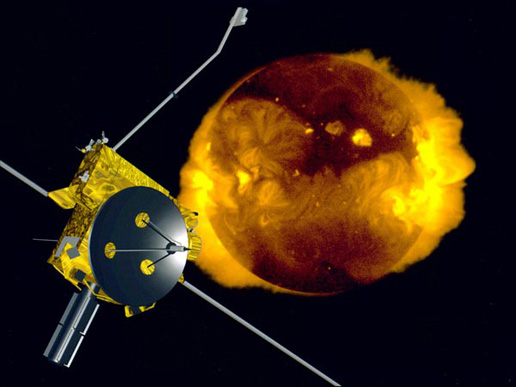 PASADENA -- Ulysses, a joint NASA and European Space Agency mission, will officially cease operations Monday, June 29, when the command to switch off the transmitter is uplinked to the spacecraft. Ulysses, which operated for more than 18 years, had charted the unexplored regions of space above the poles of the sun.

The Ulysses orbital path is carrying the spacecraft away from Earth. The ever-widening gap has progressively limited the amount of data transmitted. Ulysses project managers, with the concurrence of ESA and NASA, decided it was an appropriate time to end this epic scientific adventure.

Space Shuttle Discovery launched Ulysses on Oct. 6, 1990. A combination of solid fuel motors propelled Ulysses out of low-Earth orbit and toward Jupiter. Ulysses swung by Jupiter on Feb. 8, 1992. The giant planet's gravity bent the spacecraft's flight path southward and away from the ecliptic plane, putting the probe into a final orbit that would take it over the sun's south and north poles.

The European Space Agency's European Space Research and Technology Centre and European Space Operations Centre has managed the mission in coordination with NASA's Jet Propulsion Laboratory. Ulysses is tracked by NASA’s Deep Space Network. A joint ESA/NASA team at JPL has overseen spacecraft operations and data management. Teams from universities and research institutes in Europe and the U.S. provided the 10 instruments on board.

More information about the mission is available at: http://ulysses.jpl.nasa.gov
› Back To Top