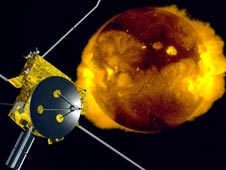 Artist concept of Ulysses and the sun.
›  Larger view
WASHINGTON - The joint NASA and European Space Agency Ulysses mission to study the sun and its influence on surrounding space is likely to cease operations in the next few months. The venerable spacecraft, which has lasted more than 17 years or almost four times its expected mission lifetime, is succumbing to the harsh environment of space.

Ulysses was the first mission to survey the space environment above and below the poles of the sun. The reams of data Ulysses returned have forever changed the way scientists view our star and its effects.

"I remember when we got those first pictures of Ulysses floating out of the space shuttle Discovery's payload bay back in October of 1990 and thinking we had a great five years ahead of us," said Ed Massey, Ulysses project manager at NASA's Jet Propulsion Laboratory, Pasadena, Calif. "I never dared think that we would be receiving invaluable science data on a near continuous basis for more than 17 years. Ulysses has set the bar on solar science data collection quite high."

Science findings and discoveries from the mission were numerous and unprecedented. Examples include taking the first direct measurements of interstellar dust particles and interstellar helium atoms in the solar system and the discovery that the magnetic field leaving the sun is balanced across latitudes.

"The data and science output of this mission truly deserves to be named after the legendary explorer in Greek mythology," said Arik Posner, Ulysses program scientist, NASA Headquarters, Washington. "My compliments go out to the international team of scientists and engineers who built a spaceship and instrument payload that is highly sensitive, yet durable enough that it withstood the most extreme conditions in the solar system, including a polar passage of the giant planet Jupiter."

Since its Jupiter flyby in 1992, Ulysses has been in a six-year orbit around the sun. Its long path through space carries it out to Jupiter's orbit and back. The farther it ventures from the sun, the colder the spacecraft becomes. If it drops to 2 degrees Celsius (36 degrees Fahrenheit), the spacecraft's hydrazine fuel will freeze. This has not been a problem in the past because Ulysses carries heaters to maintain a workable onboard temperature.

The spacecraft is powered by the decay of a radioactive isotope. Over its 17-plus years, the power has been steadily dropping. The spacecraft no longer can run all of its communications, heating and scientific equipment simultaneously. "We expect certain parts of the spacecraft to reach 2 degrees Celsius pretty soon," said Richard Marsden, ESA project scientist and mission manager. This temperature drop will block the fuel pipes, making the spacecraft impossible to maneuver.

The NASA/ESA project team approved a plan to temporarily shut off the main spacecraft's X- band transmitter. This would release 60 watts of power, which could be channeled to the science instruments and the heater. The team planned to turn the transmitter back on when data was to be transmitted back to Earth. This would have made it possible to run Ulysses for up to another two years.

Unfortunately, during the first test of this approach in January, the power supply to the radio transmitter failed to turn back on. Engineers believe the fault can be traced to the transmitter's power supply, meaning that the extra energy they hoped to gain cannot be routed to the heater and science instruments. "The decision to switch the transmitter off was not taken lightly. It was the only way to continue the science mission," Marsden said.

After many attempts, the Ulysses project team now considers it highly unlikely that the X-band transmitter will be recovered. As a result, the spacecraft has lost its ability to send large quantities of scientific data back to Earth and is facing the gradual freezing of its fuel lines. The team plans to continue operating the spacecraft in its reduced capacity, using the alternate S-band transmitter, for as long as they can over the next few weeks.

"We will squeeze the very last drops of science out of it that we can," Marsden said. "Ulysses is a terrific old workhorse. It has produced great science and lasted much longer than we ever thought it would."

The Ulysses spacecraft was built by Dornier Systems of Germany for ESA. NASA provided the launch and the upper stage boosters. The U.S. Department of Energy, Washington, supplied the generator that powers the spacecraft; science instruments were provided by both U.S. and European investigators. The spacecraft is operated from JPL by a joint NASA/ESA team and has employed NASA's Deep Space Network for communications.

More information about NASA's Ulysses mission is available on the Web at: