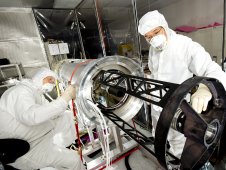 Ed West (NASA) and Ken Kobayashi (University of Alabama in Huntsville) put the finishing touches on SUMI prior to buttoning up the outer skin of the telescope. (NASA/MSFC/E. Given) 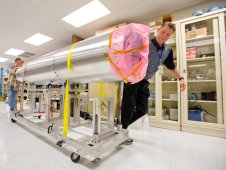 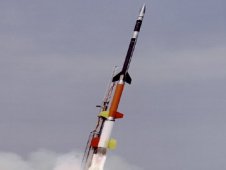 The Black Brant sounding rocket will give SUMI a thrilling eight minute ride to above the Earth’s atmosphere. (NASA) 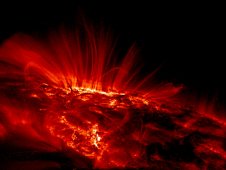 The surface of the sun in ultraviolet light. Even the relatively cool, dark regions have temperatures of thousands of degrees. (NASA/TRACE) For a thrilling eight minutes, NASA researchers will soon get a peek at one of the sun's most mysterious regions, where temperatures fluctuate from tens of thousands of degrees Fahrenheit to several million, and solar flares and coronal mass ejections originate -- potentially threatening spacecraft, Earth-based communications and the lives of explorers in space.

To learn more about this turbulent region of the sun, known as the transition region, Marshall solar physicists and engineers have designed the Solar Ultraviolet Magnetograph Investigation, or SUMI, to determine the strength and direction of magnetic fields in a region of the sun where the magnetic field has never been measured.

The transition region is a thin layer of the solar atmosphere tucked between the surface and its outermost level. Solar flares erupting here can blast their way toward Earth, shorting out ground circuits and generating radiation capable of killing a space explorer. Such outbursts seriously impact humanity's ability to expand into space, so understanding and predicting them is critically important.

For an instrument that just 22 inches across and 10 feet long, SUMI is shockingly complicated, though at its most basic level, it is just a complex telescope that images the sun. A small slit allows a beam of light from the sun to pass into the body of the instrument. The light then encounters an intricate device called a wave plate that works like polarized sunglasses to filter the light. As the wave plate rotates, it allows different polarizations of light through. The strength of that polarization is proportional to the direction and strength of the magnetic field.

As with most projects, SUMI has faced serious challenges. It requires a complicated set of optics that not only rejects uninteresting wavelengths of light, but also admits the important ones with enough intensity to actually obtain measurable data. The cameras must operate in cold temperatures while surrounded by liquid nitrogen. Some components of SUMI have taken years to design -- any scratch, piece of dirt or buildup of dust may complicate SUMI’s ability to carry out its mission. But with careful planning and numerous inspections, SUMI engineers and scientists have pressed forward.

Researches anticipate SUMI will launch July 30 on a sounding rocket from the White Sands Missile Range at White Sands, N.M. If everything goes according to plan, SUMI will provide the measurements needed to generate a snapshot of the three-dimensional structure of the solar magnetic field.

"It's like an onion, and we're slicing through the layers to get a picture of what the onion looks like at all these different layers," Cirtain said. "Eventually we'll glue the onion back together and have a 3D representation of what an onion might look like -- or in this case, the magnetic fields of the sun."

Of course, that snapshot will detail just the small slice of sun that SUMI observes, not a complete 3D model, nor one that changes over time. There's a lot more work to be done, Cirtain said, but SUMI will demonstrate that the technology is ready to be put on a spacecraft and flown for a long-term study of the solar magnetic field in the transition region.

"Fly the thing again!" Cirtain laughed. "It's not a one-shot deal -- get your science data and publish a groundbreaking research paper. It's the first step in a longer-term development to make those kinds of scientific breakthroughs possible."

The flight will provide researchers with vital information about the performance of the telescope, which will lead to modifications to improve the experiment for another flight, hopefully in about a year. At that point, researchers will assess whether the technology is ready to free-fly on a spacecraft.

For now, Cirtain and the rest of the Marshall team are excitedly looking forward to the launch. "So you launch the thing, and that's cool -- I just fired off a rocket!" he said. "You're taking the data, wearing the headset -- it's just like watching the folks at Houston doing what they do when they assist the space shuttle.

"But then they put you in a helicopter, and they fly you out to where your payload has just touched down," he added. "You pick it up, you put it in your helicopter and you fly back. To me, that seems like I’ve just rode in from droppin’ the herd off at Laredo -- comin' home from the range. I enjoy it, it's a trip. Literally!”"

Hopefully, it's a trip that will put NASA scientists further along the path to understanding one of the sun's most puzzling regions. Janet Anderson, 256-544-6162
Marshall Space Flight Center, Huntsville, Ala.
Janet.L.Anderson@nasa.gov
› Back To Top