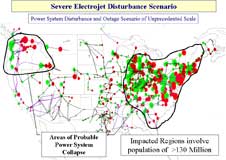 > Larger image
The image shows a scenario presented by a study participant of extreme space weather that leads to a partial, wide-spread collapse of the U.S. electric power grid with enormous consequences for the affected population. Improvements in space weather forecasting, public awareness and infrastructure preparedness can mitigate the effects. Credit: NASA
A NASA-funded study describes how extreme solar eruptions could have severe consequences for communications, power grids and other technology on Earth.

The National Academy of Sciences in Washington conducted the study. The resulting report provides some of the first clear economic data that effectively quantifies today's risk of extreme conditions in space driven by magnetic activity on the sun and disturbances in the near-Earth environment. Instances of extreme space weather are rare and are categorized with other natural hazards that have a low frequency but high consequences.

"Obviously, the sun is Earth's life blood," said Richard Fisher, director of the Heliophysics division at NASA Headquarters in Washington. "To mitigate possible public safety issues, it is vital that we better understand extreme space weather events caused by the sun's activity."

Besides emitting a continuous stream of plasma called the solar wind, the sun periodically releases billions of tons of matter called coronal mass ejections. These immense clouds of material, when directed toward Earth, can cause large magnetic storms in the magnetosphere and upper atmosphere. Such space weather can affect the performance and reliability of space-borne and ground-based technological systems.

Space weather can produce solar storm electromagnetic fields that induce extreme currents in wires, disrupting power lines, causing wide-spread blackouts and affecting communication cables that support the Internet. Severe space weather also produces solar energetic particles and the dislocation of the Earth's radiation belts, which can damage satellites used for commercial communications, global positioning and weather forecasting. Space weather has been recognized as causing problems with new technology since the invention of the telegraph in the 19th century. 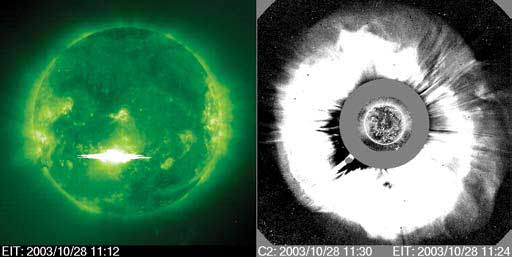 A severe space weather event is likely when an intense flare occurs on the Earth-facing side of the sun. In 2003, this flare (left image) is followed immediately by an enormous interplanetary blast wave (right image) called coronal mass ejection or CME that propagates rapidly away from the sun towards Earth. Depending on severity and nature of the storm, the collision with Earth's magnetic field called a geomagnetic storm can affect satellites, air travel and power grids. Credit: NASA

A catastrophic failure of commercial and government infrastructure in space and on the ground can be mitigated through raising public awareness, improving vulnerable infrastructure and developing advanced forecasting capabilities. Without preventive actions or plans, the trend of increased dependency on modern space-weather sensitive assets could make society more vulnerable in the future.

NASA requested the study to assess the potential damage from significant space weather during the next 20 years. National and international experts from industry, government and academia participated in the study. The report documents the possibility of a space weather event that has societal effects and causes damage similar to natural disasters on Earth.

"From a public policy perspective, it is quite significant that we have begun the extremely challenging task of assessing space weather impacts in a quantitative way," said Daniel Baker, professor and director of the Laboratory for Atmospheric and Space Physics at the University of Colorado in Boulder. Baker chaired the panel that prepared the report.

"Whether it is terrestrial catastrophes or extreme space weather incidents, the results can be devastating to modern societies that depend in a myriad of ways on advanced technological systems," said Baker. "We were delighted that NASA helped support bringing together dozens of world experts from industry and government to share their experiences and begin planning of improved public policy strategies."

> Larger image pre-storm
> Larger image post storm
The geomagnetic storms' effects can be visualized over the U.S. by showing changes of the electron density in the Earth's outermost atmospheric layers. The before image shows the ionosphere electron density as high over wide parts of the lower 48 states. The after image shows electrons strongly diminished over the central and northeastern parts of the U.S, and increased over the northwest. Extreme, rapid changes in the ionosphere can inflict strong currents in the power grid that may lead to blackouts. Credit: NASA

The sun is currently near the minimum of its 11-year activity cycle. It is expected that solar storms will increase in frequency and intensity toward the next solar maximum, expected to occur around 2012.

The Heliophysics Division of NASA's Science Mission Directorate in Washington provided funding for the study. The division seeks to understand the sun, its solar processes and the interaction of solar plasma and radiation with Earth, other planets and the universe. Understanding the connections between the sun and its planets will allow better prediction on the impacts of solar activity on humans, technological systems and even the presence of life itself in the universe.

The National Academies are chartered by Congress to provide independent technical and scientific advice to the federal government.