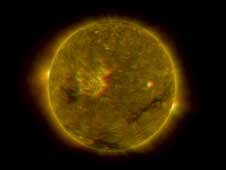 > View larger image
This is an image of the sun from NASA's twin STEREO satellites. Credit: NASA 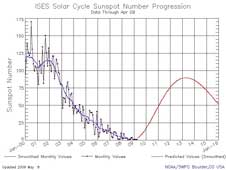 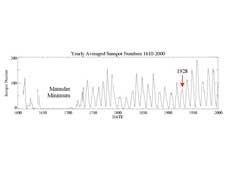 > View larger image
Yearly-averaged sunspot numbers from 1610 to 2000. Researchers believe upcoming Solar Cycle 24 will be similar to the cycle that peaked in 1928, marked in red. Credit: NASA/MSFC An international panel of experts has released a new prediction for the next solar cycle, stating that Solar Cycle 24 will peak in May 2013 with a below-average number of sunspots. Led by the National Oceanic and Atmospheric Administration (NOAA) and sponsored by NASA, the panel includes a dozen members from nine different government and academic institutions. Their forecast sets the stage for at least another year of mostly quiet conditions before solar activity resumes in earnest.

"If our prediction is correct, Solar Cycle 24 will have a peak sunspot number of 90, the lowest of any cycle since 1928 when Solar Cycle 16 peaked at 78," says panel chairman Doug Biesecker of the NOAA Space Weather Prediction Center, Boulder, Colo.

It is tempting to describe such a cycle as "weak" or "mild," but that could give the wrong impression. "Even a below-average cycle is capable of producing severe space weather," says Biesecker. "The great geomagnetic storm of 1859, for instance, occurred during a solar cycle of about the same size we’re predicting for 2013."

The 1859 storm -- named the "Carrington Event" after astronomer Richard Carrington who witnessed the instigating solar flare -- electrified transmission cables, set fires in telegraph offices, and produced Northern Lights so bright that people could read newspapers by their red and green glow. A recent report by the National Academy of Sciences found that if a similar storm occurred today, it could cause $1 to 2 trillion in damages to society’s high-tech infrastructure and require four to ten years for complete recovery. For comparison, Hurricane Katrina caused $80 to 125 billion in damage.

The latest forecast revises a prediction issued in 2007, when a sharply divided panel believed solar minimum would come in March 2008 and would be followed by either a strong solar maximum in 2011 or a weak solar maximum in 2012. Competing models of the solar cycle produced different forecasts, and researchers were eager for the sun to reveal which was correct.

"It turns out that none of the models were really correct," says Dean Pesnell of the Goddard Space Flight Center, Greenbelt, Md. NASA’s lead representative on the panel. "The sun is behaving in an unexpected and very interesting way."

Astronomers first noted the solar cycle in the mid-1800s. Graphs of sunspot numbers resemble a roller coaster, going up and down with an approximately 11-year period. Predicting the peaks and valleys has proven troublesome because cycles vary in length from 9 to 14 years. Some peaks are high, others low. The valleys are usually brief, lasting only a couple of years, but sometimes they stretch much longer. In the 17th century, the sun plunged into a 70-year period of spotless quiet known as the Maunder Minimum that still baffles scientists.

Right now, the solar cycle is in a valley--the deepest of the past century. In 2008 and 2009, the sun set Space Age records for low sunspot counts, weak solar wind, and low solar irradiance. The sun has gone more than two years without a significant solar flare.

"In our professional careers, we’ve never seen anything quite like it," says Pesnell. "Solar minimum has lasted far beyond what we predicted in 2007."

In recent months, however, the sun has begun to show signs of life. Small sunspots and "proto-sunspots" are popping up with increasing frequency. Enormous currents of plasma on the sun’s surface ("zonal flows") are gaining strength and slowly drifting toward the sun’s equator. Radio astronomers have detected a tiny but significant uptick in solar radio emissions. All these things are precursors of an awakening Solar Cycle 24 and form the basis for the panel’s new, almost unanimous forecast.

According to the forecast, the sun should remain generally calm for at least another year. From a research point of view, that’s good news because solar minimum has proven to be more interesting than anyone imagined. Low solar activity has a profound effect on Earth’s atmosphere, allowing it to cool and contract. Space junk accumulates in Earth orbit because there is less aerodynamic drag. The becalmed solar wind whips up fewer magnetic storms around Earth’s poles. Cosmic rays that are normally pushed back by solar wind instead intrude on the near-Earth environment. There are other side-effects, too, that can be studied only so long as the sun remains quiet.

Meanwhile, the sun pays little heed to human committees. There could be more surprises, panelists acknowledge, and more revisions to the forecast.