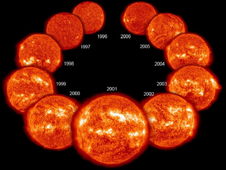 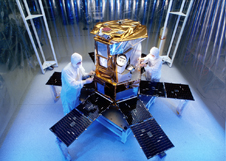 The SORCE satellite in a clean room before it launched. Credit: NASA
› Larger image 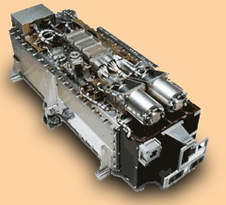 A photograph of the Solar Irradiance Monitor. Credit: LASP 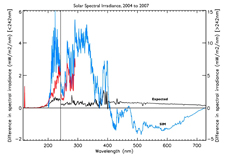 Between 2004 and 2007, the Solar Irradiance Monitor (blue line) measured a decrease in ultraviolet radiation (less than 400 nanometers) that was a factor of four to six larger than expected (black line). In the visible part of the spectrum (400 to 700 nanometers), SIM showed a slight increase in comparison to what was expected. Measurements (red) from another ultraviolet radiation-sensing instrument called SOLSTICE compare well with those from SIM. Note: different scales are used for values at wavelengths less and more than 242 nanometers (see left and right axes respectively). Credit: Joanna Haigh/Imperial College London
› Larger image Two satellite instruments aboard NASA's Solar Radiation & Climate Experiment (SORCE) mission -- the Total Solar Irradiance Monitor (TIM) and the Solar Irradiance Monitor (SIM) -- have made daily measurements of the sun's brightness since 2003.

The two instruments are part of an ongoing effort to monitor variations in solar output that could affect Earth's climate. Both instruments measure aspects of the sun's irradiance, the intensity of the radiation striking the top of the atmosphere.

Instruments similar to TIM have made daily irradiance measurements of the entire solar spectrum for more than three decades, but the SIM instrument is the first to monitor the daily activity of certain parts of the spectrum, a measurement scientists call solar spectral irradiance.

In recent years, SIM has collected data that suggest the sun's brightness may vary in entirely unexpected ways. If the SIM's spectral irradiance measurements are validated and proven accurate over time, then certain parts of Earth’s atmosphere may receive surprisingly large doses of solar radiation even during lulls in solar activity.

"We have never had a reason until now to believe that parts of the spectrum may vary out of phase with the solar cycle, but now we have started to model that possibility because of the SIM results,” said Robert Cahalan, the project scientist for SORCE and the head of the climate and radiation branch at NASA's Goddard Space Flight Center in Greenbelt, Md.

Cahalan, as well as groups of scientists from the University of Colorado at Boulder and Johns Hopkins University, presented research at the American Geophysical Union meeting in San Francisco in December that explored the climate implications of the recent SIM measurements.

Cahalan’s modeling, for example, suggests that the sun may underlie variations in stratospheric temperature more strongly than currently thought. Measurements have shown that stratospheric temperatures vary by about 1 °C (1.8 °F) over the course of a solar cycle, and Cahalan has demonstrated that inputting SIM’s measurements of spectral irradiance into a climate model produces variations of that same magnitude.

As recently as the 1970s, scientists assumed that the sun's irradiance was unchanging; the amount of energy it expels was even called the "solar constant." However, instruments similar to TIM and SIM have made clear that the sun's output actually fluctuates in sync with changes in the sun's magnetic field.

Indeed, TIM and its predecessor instruments, whose records of irradiance began in 1978, show that the sun's output varies by about 0.1 percent as the sun cycles through periods of high and low electromagnetic activity every eleven years or so. In practice, this cycling means the sun's brightness, as measured by TIM, goes up a bit when large numbers of sunspots and accompanying bright spots called faculae are present on the sun, yet goes down slightly when sunspots and faculae are sparse, like they have been in the last few years as the sun has gone through an unusually quiet period.

However, there is a critical difference between the SIM and TIM, explains Jerry Harder, the lead SIM instrument scientist and a researcher at the Laboratory for Atmospheric and Space Physics (LASP) at the University of Colorado in Boulder. While the TIM lumps all wavelengths -- including infrared, visible, and ultraviolet light -- into one overall measurement, the SIM isolates and monitors specific portions of the spectrum.

Notably, this makes SIM the first space-based instrument capable of continuously monitoring the visible and near-infrared portion, parts of the spectrum that are particularly important for the climate. SIM also offers the most comprehensive view of the individual components that make up the sun's total solar irradiance to date.

Some of the variations that SIM has measured in the last few years do not mesh with what most scientists expected. Climatologists have generally thought that the various part of the spectrum would vary in lockstep with changes in total solar irradiance.

However, SIM suggests that ultraviolet irradiance fell far more than expected between 2004 and 2007 -- by ten times as much as the total irradiance did -- while irradiance in certain visible and infrared wavelengths surprisingly increased, even as solar activity wound down overall.

The steep decrease in the ultraviolet, coupled with the increase in the visible and infrared, does even out to about the same total irradiance change as measured by the TIM during that period, according to the SIM measurements.

The stratosphere absorbs most of the shorter wavelengths of ultraviolet light, but some of the longest ultraviolet rays (UV-A), as well as much of the visible and infrared portions of the spectrum, directly heat Earth's lower atmosphere and can have a significant impact on the climate.

Some climatologists, including Judith Lean of the United States Naval Research Laboratory, Washington, remain skeptical of the SORCE SIM measurements. "I strongly suspect the SIM trends are instrumental, not solar," said Lean, noting that instrumental drift has been present in every instrument that has tracked ultraviolet wavelengths to date.

"If these SIM measurements indicate real solar variations, then it would mean you could expect a warmer surface during periods of low solar activity, the opposite of what climate models currently assume," said Gavin Schmidt, a climate modeling specialist at NASA's Goddard Institute for Space Studies in New York City.

However, the surprising SIM measurements correspond with a period of unusually long and quiescent solar minimum that extended over 2007 to 2009. It may not be representative of past or future solar cycles, solar scientists caution.

Researchers will surely continue puzzling over the surprising SIM results for some time, but there is already considerable agreement on one point: that the need for continuous SIM and TIM measurements going forward has grown more urgent.

Modeling studies are showing that our climate depends critically on the true solar spectral variations. "If we don't have the instruments up there to watch this closely, we could be arguing about spectral irradiance and climate for decades," said Cahalan.

A new TIM instrument is slated to launch on the Glory satellite this February, but a replacement for the SORCE SIM instrument -- called the Total and Spectral Solar Irradiance Sensor (TSIS) -- likely won't fly until 2014 or 2015. This could create a gap between the current SIM and its replacement, a situation that would present a significant obstacle to identifying any possible longer-term trend in solar spectral irradiances, and thus to nailing down the sun’s role in long-term climate change.

"Both instruments -- TIM and SIM -- are absolutely critical for understanding how climate works. We neglect either of them at our peril," said Cahalan.

Why NASA Keeps a Close Eye on the sun
http://www.nasa.gov/topics/solarsystem/features/sun-brightness.html