> View the solar balance Web video
> Download the video
Credit: NASA Goddard Space Flight Center The sun has powered almost everything on Earth since life began, including its climate. The sun also delivers an annual and seasonal impact, changing the character of each hemisphere as Earth's orientation shifts through the year. Since the Industrial Revolution, however, new forces have begun to exert significant influence on Earth's climate.

"For the last 20 to 30 years, we believe greenhouse gases have been the dominant influence on recent climate change," said Robert Cahalan, climatologist at NASA’s Goddard Space Flight Center in Greenbelt, Md.

For the past three decades NASA scientists have investigated the unique relationship between the sun and Earth. Using space-based tools, like the Solar Radiation and Climate Experiment (SORCE), they have studied how much solar energy illuminates Earth, and explored what happens to that energy once it penetrates the atmosphere. The amount of energy that reaches Earth's outer atmosphere is called the total solar irradiance. Total solar irradiance is variable over many different timescales, ranging from seconds to centuries due to changes in solar activity.

The sun goes through roughly an 11-year cycle of activity, from stormy to quiet and back again. Solar activity often occurs near sunspots, dark regions on the sun caused by concentrated magnetic fields. The solar irradiance measurement is much higher during solar maximum, when sunspot cycle and solar activity is high, versus solar minimum, when the sun is quiet and there are usually no sunspots. 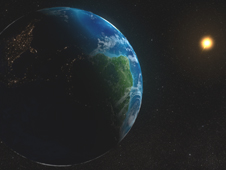 The sun radiates huge amounts of electromagnetic energy in all directions. Earth is only one small recipient of the sun's energy; the sun's rays extend far out into the solar system, illuminating all the other planets. Credit: NASA
> Larger image "The fluctuations in the solar cycle impacts Earth's global temperature by about 0.1 degree Celsius, slightly hotter during solar maximum and cooler during solar minimum," said Thomas Woods, solar scientist at the University of Colorado in Boulder. "The sun is currently at its minimum, and the next solar maximum is expected in 2012."

Using SORCE, scientists have learned that about 1,361 watts per square meter of solar energy reaches Earth's outermost atmosphere during the sun's quietest period. But when the sun is active, 1.3 watts per square meter (0.1 percent) more energy reaches Earth. "This TSI measurement is very important to climate models that are trying to assess Earth-based forces on climate change," said Cahalan.

Over the past century, Earth's average temperature has increased by approximately 0.6 degrees Celsius (1.1 degrees Fahrenheit). Solar heating accounts for about 0.15 C, or 25 percent, of this change, according to computer modeling results published by NASA Goddard Institute for Space Studies researcher David Rind in 2004. Earth's climate depends on the delicate balance between incoming solar radiation, outgoing thermal radiation and the composition of Earth's atmosphere. Even small changes in these parameters can affect climate. Around 30 percent of the solar energy that strikes Earth is reflected back into space. Clouds, atmospheric aerosols, snow, ice, sand, ocean surface and even rooftops play a role in deflecting the incoming rays. The remaining 70 percent of solar energy is absorbed by land, ocean, and atmosphere.

Before the Industrial Age, the sun and volcanic eruptions were the major influences on Earth's climate change. Earth warmed and cooled in cycles. Major cool periods were ice ages, with the most recent ending about 11,000 years ago.

"Right now, we are in between major ice ages, in a period that has been called the Holocene,” said Cahalan. “Over recent decades, however, we have moved into a human-dominated climate that some have termed the Anthropocene. The major change in Earth's climate is now really dominated by human activity, which has never happened before."

The sun is relatively calm compared to other stars. "We don't know what the sun is going to do a hundred years from now," said Doug Rabin, a solar physicist at Goddard. "It could be considerably more active and therefore have more influence on Earth's climate."

Or, it could be calmer, creating a cooler climate on Earth similar to what happened in the late 17th century. Almost no sunspots were observed on the sun's surface during the period from 1650 to 1715. This extended absence of solar activity may have been partly responsible for the Little Ice Age in Europe and may reflect cyclic or irregular changes in the sun's output over hundreds of years. During this period, winters in Europe were longer and colder by about 1 C than they are today.

Since then, there seems to have been on average a slow increase in solar activity. Unless we find a way to reduce the amount of greenhouse gases we put into the atmosphere, such as carbon dioxide from fossil fuel burning, the solar influence is not expected to dominate climate change. But the solar variations are expected to continue to modulate both warming and cooling trends at the level of 0.1 to 0.2 degrees Celsius (0.18 to 0.26 Fahrenheit) over many years.

For three decades, a suite of NASA and European Space Agency satellites have provided scientists with critical measurements of total solar irradiance. The Total Irradiance Monitor, also known as the TIM instrument, was launched in 2003 as part of the NASA’s SORCE mission, and provides irradiance measurements with state-of-the-art accuracy. TIM has been rebuilt as part of the Glory mission, scheduled to launch in 2009. Glory's TIM instrument will continue an uninterrupted 30-year record of solar irradiance measurements and will help researchers better understand the sun's direct and indirect effects on climate. Glory will also collect data on aerosols, one of the least understood pieces of the climate puzzle.