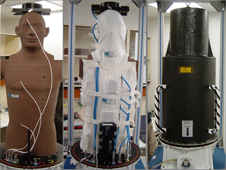 Matroshka in and out of his white traveling poncho, and encapsulated.
Credit:Science@NASA
Larger image 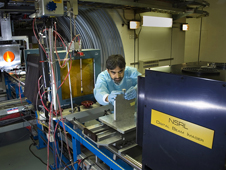 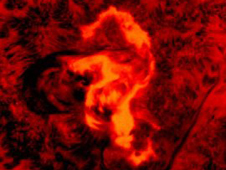 One of the August 1972 solar flares.
> Launch movie recorded at the Big Bear Solar Observatory.
Credit:Science@NASA
In 1972, Apollo astronauts narrowly escaped a potential catastrophe. On August 2 of that year, a large and angry sunspot appeared and began to erupt, over and over again for more than a week, producing a record-setting fusillade of solar proton radiation. Only pure luck saved the day. The eruptions took place during the gap between Apollo 16 and 17 missions, so astronauts missed the storm.

Researchers still wonder, what would have happened if the timing had been just a little different, what if astronauts had been caught unprotected on the surface of the Moon?

NASA needs to know. The agency is in high gear preparing to send people to the Moon to set up a manned outpost, a step toward eventually sending humans to Mars or elsewhere in the solar system. These missions will take astronauts outside the protection of Earth's magnetic field for months or even years at a time, and NASA must know how to keep its explorers safe from extreme solar storms.

So scientists are creating an artificial solar radiation storm right here on Earth. And they're testing its effects on an artificial human: Matroshka, the Phantom Torso.

The European Space Agency's Matroshka and his NASA counterpart Fred have already flown in experiments aboard the Space Shuttle and the International Space Station that have shown how other kinds of space radiation such as cosmic rays penetrate the human body. Now, scientists at Brookhaven National Laboratory in Upton, New York, are subjecting an artificial torso to a beam of protons to learn how astronauts would be affected by the 1972 event.

"We want to know how close it comes to a dangerously acute exposure," says Francis Cucinotta, the Chief Scientist for NASA's Radiation Program at the Johnson Space Center in Houston, Texas.

In the parlance of radiation experts, "acute exposure" is brief but intense. Radiation strikes the body over a relatively short period of time ranging from minutes to hours—just like a solar flare. This is different from the "chronic exposure" astronauts normally experience as they travel through space. Cosmic rays hit their bodies in a slow drizzle spread out over weeks or months. With chronic exposure, the body has time to repair or replace damaged cells as it goes along, but an acute exposure gives the body little time to cope with the damage.

"The biological effects are very sensitive to the dose rate," Cucinotta explains. "A dose of radiation delivered over a short amount of time is two to three times more damaging than the same dose over a few days."

At first glance, the 1972 event would seem to fall into the acute category—it was after all a solar flare. But there's a problem. It was actually a series of flares producing a radiation storm that was longer and less impulsive than normal. Radiation exposure would have been neither chronic nor clearly acute, but somewhere in between. In this gray area, details about how much of the radiation actually reaches a person’s vital organs — versus how much is blocked by their spacesuit, skin and muscles — can make all the difference.

Matroshka is helping scientists understand these details. He's a life-size plastic replica of a human torso, sans arms and legs. The plastic closely matches the density of organs and tissues in the human body, and this Phantom Torso is embedded with hundreds of radiation sensors throughout his body. He even has real human blood cells.

"We put blood cells in small tubes in the stomach and in some places in the bone marrow," some of which are deep within the torso while others are close to the surface where there's less "tissue" to block radiation. "One of the questions we have is whether the less shielded parts of the bone marrow will be [much harder hit]," raising the risks of leukemia and other cancers.

Using real blood cells lets scientists see how much the radiation damages the cells' DNA. High-speed particles of proton radiation can smash into DNA, breaking the string-like molecules. Cells can usually repair these breaks, but if several breaks occur within a short period of time, the damage can be irreparable. At best, the cell will then self-destruct. At worst, it will go haywire and grow out of control, becoming cancerous.

To subject Matroshka to a 1972-style radiation storm, scientists have devised a way to simulate that event using a high-energy proton beam at NASA's Space Radiation Lab in Brookhaven. The beam fans out so that, at the point where Matroshka sits, it's 60 cm across — large enough to engulf the entire torso. By stepping the energy of the beam through a series of energy levels, scientists can mimic the unique energy spectrum of the protons in the 1972 event.

In the upcoming experiment, led by Guenther Reitz of the German Aerospace Center (DLR) in Cologne, Matroshka's radiation sensors will reveal how much proton radiation reaches various parts of the mannequin's body. "With protons, you might have an order of magnitude (a factor of ten) difference from one part of the body to another," notes Cucinotta.

The readings will help mission planners figure out how much shielding is necessary to protect real astronauts from a 72-style storm. The results will also point researchers in the right direction for medical treatments that might help mitigate the effects of such an event.

Unlike a real astronaut, Matroshka can withstand multiple flares with no lasting side effects. A quick transfusion of blood cells and voilà--Matroshka is ready for another blast.

So let the flares begin—and stay tuned for results.

Tony Phillips
Science@NASA
› Back To Top