Solar Shield Experiment Aims to Keep the Power On 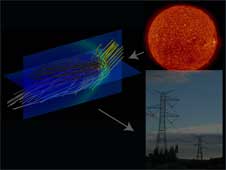 Solar activity, the source of all space weather, affects Earth’s magnetosphere and upper atmosphere. During a space storm, high-power transmission lines are at risk for damage and power outages. Credit: NASA/CCMC
> Larger image
When you flip a light switch to illuminate the pages of your favorite book or reach into your refrigerator for that last piece of key lime pie, you expect the electric current coursing through the outlets to power everything from your lights to your nifty new big-screen television. When the power goes out, it can be more than just an inconvenience.

NASA’s Solar Shield experiment explores how timely space weather forecasts can help power companies keep the power flowing to the many appliances and electronic gadgets we rely on every day.

We consume electricity at an ever-increasing pace. As power companies try to keep up with the demand, they operate ever closer to the limit of their capabilities, leaving little margin for error. Just as these companies rely on advanced warning of severe weather that could disrupt the North American power grid, they also may soon come to rely on near real-time forecasts of severe space weather. 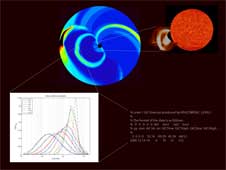 NASA researchers use SOHO observations of coronal mass ejections (CMEs) to drive their Solar Shield experimental models and create a space weather forecast days in advance of the CME’s effects near Earth. Credit: NASA/CCMC
> Larger image Space weather originates on the sun. Solar eruptions such as solar flares or coronal mass ejections (CMEs) can spew billions of tons of electrically charged particles toward Earth on the solar wind. When this space storm of particles interacts with Earth’s magnetosphere and upper atmosphere, the particles release their energy and sometimes cause a geomagnetically induced current (GIC). GICs are currents flowing in power transmission lines generated by geomagnetic space storms.

Like an unexpected surge of power that overloads your computer if not properly protected, GICs can saturate high-voltage power transformers, causing damage or electric blackouts on a much larger scale. Such an event happened in March 1989, when a space storm took out Canada’s Hydro-Quebec power grid for more than nine hours and resulted in significant economic losses.

The experimental Solar Shield system forecasts what effects earthbound space weather is likely to have on the North American power grid. 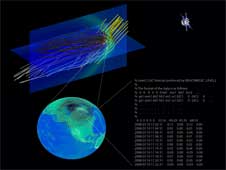 The researchers use data from observations of the sun and solar wind to estimate the probability of GICs impacting individual power grid nodes, or stations. Observations of CMEs from the Solar and Heliospheric Observatory (SOHO) – a joint NASA/ESA mission – and observations of the solar wind from NASA’s Advanced Composition Explorer (ACE) spacecraft drive computer models that generate a space weather forecast.

“Using observations of the sun and solar wind to drive our space physics models, we generate advanced warning of space weather that can affect high-voltage power transmissions,” says Pulkkinen.

Dr. Pulkkinen and his team utilize computer models at the Community Coordinated Modeling Center (CCMC) at NASA’s Goddard Space Flight Center in Greenbelt, Md., to provide two types of space weather forecasts. Long-term (1-2 days) forecasts use SOHO data and take a few hours to generate. Short-term forecasts (30-60 minutes) use solar-wind observations from ACE and can be generated in a mere 10-15 minutes. 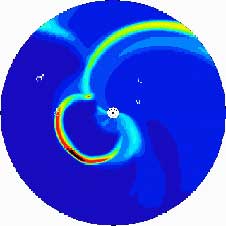 Using observations of the solar eruptions (CMEs) known as the ‘Halloween’ storm of October 2003, NASA researchers ran this ENLIL model of the heliosphere. ENLIL is an extensive three-dimensional magnetohydrodynamic (MHD) model of the heliosphere that is run by using remote solar observations. The view is in the ecliptic plane. Lines show the direction of the magnetic field and color coding shows the density of the heliospheric plasma. The symbols show the locations of Mercury, Venus, Earth and Mars. Time step between the frames is six hours. Credit: NASA/CCMC/D. Odstrcil, University of Colorado
> Click to view animation. The CCMC, which hosts various models provided by the space physics community, tests and evaluates models and supports space weather forecasters as the models transition into operation. The Solar Shield experiment, now undergoing such testing and evaluation, may be transitioned into actual space weather operations by non-NASA entities in the near future.

The Solar Shield project is a collaborative effort between NASA and the Electric Power Research Institute.