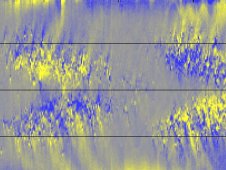 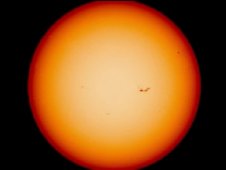 Video showing the association of magnetic field with sunspots and coronal loops.
View video (Windows, streaming)
View all videos Solar physicist David Hathaway of NASA's Marshall Space flight Center in Huntsville, AL and graduate student Lisa Rightmire of the University of Memphis in Tennessee have been monitoring the sun using the Solar and Heliospheric Observatory (SOHO). They observe a massive circulating current of fire (hot plasma) within the sun operating at a faster pace as reported in the March 12th issue of Science.

The current of fire is a conveyor belt-like system called the Meridional Flow which rises to the surface at the sun's equator and spreads out toward the poles where it sinks back into the sun. "Normally it reaches peak speeds of about 20 mph," says Hathaway. "However, in 2004 the speed increased to nearly 30 mph and has remained that fast since."

The faster rate of currents on the sun and the expected weaker solar cycle have affects for those of us here on Earth. One affect is the temperature increase of the Earth could slow down, there would be fewer auroras, and to the extent that we depend on satellites, GPS, and cell phones there should be less disruption in service.

For more information about the sun's meridional flow:
"Solar 'Current of Fire' Speeds Up" (Science@NASA article)
"Variations in the Sun's Meridional Flow Over a Solar Cycle" (Science magazine article)