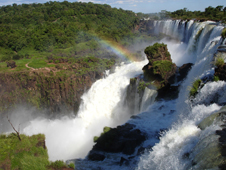 A true cascade of water and turbulence at the Iguazu Falls in Argentina. Credit: Fouad Sahraoui
> Larger image 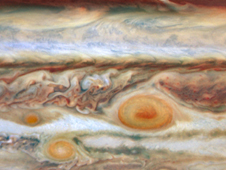 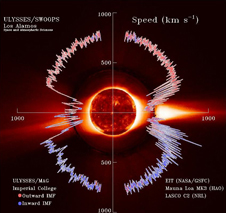 The solar wind, shown here in a plot of data from the Ulysses spacecraft, flows away from the sun at a million miles per hour and is heated by a "turbulent cascade." Credit: NASA
> Larger image 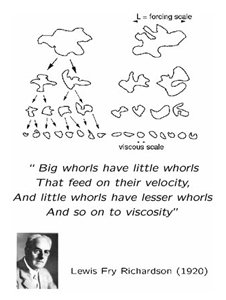 The basic concept introduced by physicist Lewis Richardson in 1920. Credit: Antonio Celani
> Larger image The solar wind is hotter than it should be, and for decades researchers have puzzled over the unknown source of energy that heats it. In a paper published in the June 12 issue of Physical Review Letters, NASA scientists say they may have found the answer.

"The energy source is turbulence," says co-author Melvyn Goldstein, chief of the Geospace Physics Laboratory at NASA's Goddard Space Flight Center, Greenbelt, Md. "The sun heats the solar wind by stirring it up."

It's a bit like stirring your coffee--in reverse. When you stir your morning cup of Joe, the coffee cools off. But when the sun stirs the solar wind, the solar wind heats up.

Consider the coffee. When you stir it with a spoon, the stirring produces swirls and vortices in the liquid. The vortices fragment into smaller and smaller eddies until, at the smallest scales, the motions dissipate and the energy turns into heat. Because energy cascades down from the large swirls to the smaller ones, the process is called a turbulent cascade.

Theoretically, the turbulent cascade should heat the coffee. Real coffee cools off, however, because the act of stirring brings warm coffee from the depths of the cup into contact with cooler air above. Cool air absorbs the heat—the heat the coffee had to begin with plus the heat you added by stirring—and you can take a sip without scalding yourself.

But there is no cool air in space, and therein lies the difference between coffee and solar wind.

The sun stirs the solar wind with fast streams of gas that pour out of holes in the sun's atmosphere. Essentially, the solar wind stirs itself. The stirring produces swirls and eddies; larger eddies break into smaller ones, producing a cascade of energy that eventually dissipates as heat. The temperature shoots up and there is no cool air to stop it.

"We've suspected for years that turbulence heats the solar wind," says Fouad Sahraoui, lead author of the paper and a visiting NASA Fellow from the Centre National de la Recherche Scientifique (CNRS) in France. "Now we're getting detailed measurements of the process in action."

The key data came from a quartet of European spacecraft collectively known as Cluster, launched in 2000 to study the giant bubble of magnetism that surrounds Earth. The magnetosphere protects our planet from solar wind and cosmic rays. It contains the Van Allen radiation belts, auroras, and giant electrical "ring currents" of staggering power. Cluster spends much of its time inside the magnetosphere, where the spacecraft can study the wide variety of phenomena at work there.

One day in March 2006, the four spacecraft took a brief excursion outside the bubble into the solar wind. For three hours, their sensors made rapid-fire measurements of electromagnetic waves and turbulent eddies in the million-kilometer-per-hour gas flowing past them.

"That was when we made the discovery," says Goldstein. "Turbulent energy was cascading from large scale structures around 1,000,000 kilometers (621,400 miles) in size all the way down to structures as small as 3 kilometers (1.8 miles). At the small end of the cascade, energy was absorbed by electrons in the solar wind."

Sahraoui and Goldstein would like to confirm their findings and flesh out the details by sending Cluster back into the solar wind for more than "three lucky hours." But the basic result seems solid enough: Turbulent heating boosts the temperature of the solar wind near Earth from tens of thousands of degrees (the value theoreticians expect) to hundreds of thousands or more.

Goldstein says such turbulent heating probably happens in many other astrophysical situations, from stellar winds to planetary magnetospheres to black holes. There's even a down-to-Earth application: nuclear fusion reactors. Turbulence inside experimental fusion chambers can produce instabilities that destroy the confinement of the fusion plasma.

"The solar wind is a natural laboratory for understanding this physics," says Sahraoui, "and we are planning more observations to see how common the phenomenon might be."

The Solar Wind – a tutorial
http://solarscience.msfc.nasa.gov/SolarWind.shtml