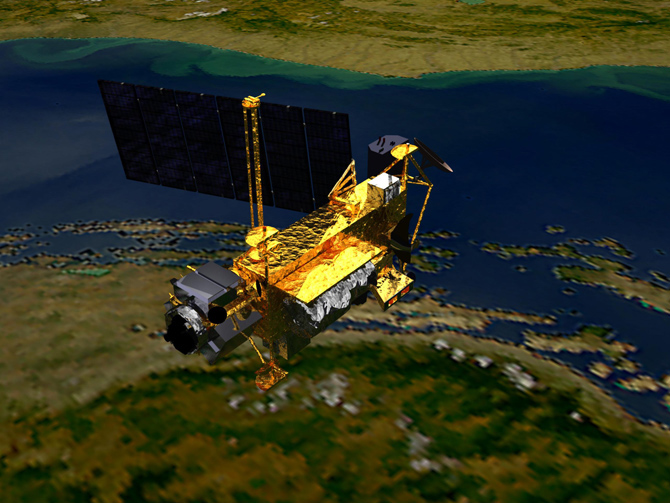 It isn't easy to predict exactly when a satellite like UARS will re-enter Earth's atmosphere, since the space it travels through changes density over time due to incoming particles and radiation energy from activity on the sun. Credit: NASA
› View larger

The world's eyes are on the Upper Atmosphere Research Satellite (UARS) headed toward re-entry into Earth's atmosphere. The satellite is currently predicted to re-enter sometime on the afternoon of Friday, September 23, 2011, but it hasn't been easy to precisely determine the path and pace of UARS despite the fact that scientists well understand how satellites move through space. The problem lies in the fact that space itself changes over time -- the upper layers of Earth's atmosphere can warm up and, more importantly, puff up in response to incoming energy and particles from the sun.

Satellites experience drag as they move through the outer reaches of Earth's atmosphere, a large region of hot gas known as the thermosphere. Like a marshmallow held over a campfire, the thermosphere puffs up when heated by solar ultraviolet and x-radiation. The more the thermosphere swells, the more drag satellite experience. For satellites at lower inclinations and at low latitudes near the equator, this increase in energy mostly comes from the bright area surrounding sunspots and solar flares. The number of photons at the higher energies can increase by up to 100 times or more within a few minutes due to a single flare, and can then last up to a day before returning to pre-flare levels.

Over the last few weeks a variety of solar events have affected the density of the thermosphere. With an increase in solar activity, there's been a sharp uptick in extreme ultraviolet photons being deposited into Earth's upper atmosphere. In addition, a large flare, categorized as an X1.4 class flare, peaked on September 22 at 7:01 AM ET. The output of this particular flare could increase the drag on satellites at heights of 300 miles by up to about 50%, but at UARS' current altitude of about 110 miles, it will only experience a change in drag of under 1%, but it nevertheless represents the varying solar activities that make for an environment that is difficult to categorize one moment to the next. And that environment has everything to do with the amount of atmospheric drag on UARS and, consequently, its re-entry time. New events occurring on the currently very active Sun might affect the re-entry of UARS even more.

Solar activity driving premature reentry of satellites is not new. Strong solar activity caused the early reentry of the Skylab orbiting observatory, and the famous “Halloween Storms” of Oct-Nov 2003 caused the Student Nitric Oxide Explorer (SNOE) satellite to reenter earlier than expected before these storms occurred.

Measurements by Solar Dynamics Observatory and other spacecraft in NASA's Heliophysics System Observatory are currently helping to refine how scientists and spacecraft operators can predict drag on all satellites.