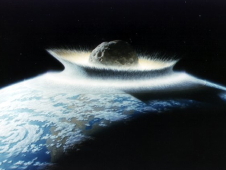 Image Credit: NASA/Don Davis
Click image for full resolution.
A team of NASA-funded researchers has unveiled a new theory that contends planets gained the final portions of their mass from a limited number of large comet or asteroid impacts more than 4.5 billion years ago. These impacts added less than one percent of the planets' mass.

Scientists hope the research not only will provide a better historical picture of the birth and evolution of Earth, the moon and Mars, but also allow researchers to better explore what happened in our solar system's beginning and middle stages of planet formation.

“No one has a model of precisely what happened at the end of planet formation—we’ve had a broad idea—but variables such as impactor size, the approximate timing of the impacts, and how they affect the evolution of the planets are unknown,” said William Bottke, principal investigator from the Southwest Research Institute (SWRI) in Boulder, Colo. “This research hopefully provides better insights into the early stages of planet formation.”

The team used numerical models, lunar samples returned by Apollo astronauts and meteorites believed to be from Mars to develop its findings. The scientists examined the abundances of elements such as gold and platinum in the mantles, or layers beneath the crust, of Earth, the moon and Mars. Consistent with previous studies, they concluded the elements were added by a process called late accretion during a planet's final growth spurt.

"These impactors probably represent the largest objects to hit Earth since the giant impact that formed our moon," Bottke said. “They also may be responsible for the accessible abundance of gold, platinum, palladium, and other important metals used by our society today in items ranging from jewelry to our cars’ catalytic convertors.”

The results indicate the largest Earth impactor was between 1,500 - 2,000 miles in diameter, roughly the size of Pluto. Because it is smaller than Earth, the moon avoided such enormous projectiles and was only hit by impactors 150 - 200 miles wide. These impacts may have played important roles in the evolution of both worlds. For example, the projectiles that struck Earth may have modified the orientation of its spin axis by 10 degrees, while those that hit the moon may have delivered water to its mantle.

"Keep in mind that while the idea the Earth-moon system owes its existence to a single, random event was initially viewed as radical, it is now believed that large impacts were commonplace during the final stages of planet formation,’ Bottke said. “Our new results provide additional evidence that the effects of large impacts did not end with the moon-forming event."

The paper, "Stochastic Late Accretion to the Earth, Moon, and Mars," was published in the Dec. 9 issue of Science. It was written by Bottke and David Nesvorny of SWRI; Richard J. Walker of the University of Maryland; James Day of the University of Maryland and Scripps Institution of Oceanography, University of California, San Diego; and Linda Elkins-Tanton of the Massachusetts Institute of Technology. The research is funded by the NASA Lunar Science Institute (NLSI) at the agency's Ames Research Center in Moffett Field, Calif.

The NLSI is a virtual organization that enables collaborative, interdisciplinary research in support of NASA lunar science programs. The institute uses technology to bring scientists together around the world and comprises competitively selected U.S. teams and several international partners. NASA's Science Mission Directorate and the Exploration Systems Mission Directorate at the agency's Headquarters in Washington, funds the institute, which is managed by a central office at Ames.

For more information on NLSI, visit: